It was recommended by ripple4 that I post my experience during this severe weather event as a new topic. Note that these are my observations and calcs from data available from both ERCOT and Griddy's pricing/timing during the event, but have not done extensive research on ERCOT/PUC's "cash flow" that was certainly in the billions $$s.

Comments from my experience in Houston, TX using Griddy - a retail provider - during the Texas storm:
- My contract with Griddy is basically a subscription fee of $10/month - and pay whatever energy cost is set by ERCOT/TX PUC over 15 min interval (may be 5 min average - would have made little difference during this event).
- There were several days of continuous $9/kWH pricing (yes, 900 cent/kWH). Not being at home and having gas heating, my consumption was only 20-30 kWH per day. Even with this low usage, my electrical bill during this extreme event was over $1000 - anecdotally that some where over $10,000.
- If the entire energy consumption listed by ERCOT during this several day event was priced at the level, my grosso-modo calcs indicate that the providers took in about $45 billion during the storm as every kWH was charged at this level, not just the high cost/marginal providers.
- As a result, Griddy folded and is being sued for millions $$ for gouging practices (IMO, a disgrace as in reality, the gouging is the ERCOT/PUC pricing structure).
- Millions of households statewide were left without power (heat) for several days as ERCOT shut down massive areas of the grid (temperatures in the teens and below freezing for extended days).
- It appears to me that large generator/retailers like NRG did not suffer so much because for them it was a "wash" (although ERCOT has a "Ancilliary" fee of about 10-15% that I guess they pocket - in this case billions $$s).
- Many ERCOT resignations resulted!
- I'm sure my analysis may overstate what ERCOT/providers "took in", as I saw reports that it was in the 10 - 20 billion $$, but regardless, the $9/kWH is so extreme that (IMO), the pricing system needs a complete overhaul. Marginal providers at 2 or 3 times the average rate would be more realistic?
- Bottom line, a real fiasco!
2012 Leaf SL
2021 Leaf SV Plus

No s*it! TX's problem became ours when our natural gas cost went through the ROOF! Basically every gas supplier in MN, probably even ones who don't get their natural gas from TX

are telling us that basically everyone in MN will need to pay $200-$400 in added natural gas prices for this event, businesses much more! Personally I don't think this is fair in the least as our gas meters are only read on a monthly basis so what they are going is taking our monthly gas usage and dividing it by now many days/hours? natural gas prices were through the roof, even if you used 0 gas during the event, you have no way of proving it as were billed monthly and everything will be averaged out that way

We in Colorado on Xcel also have to pay: "Xcel customers could be charged extra $264 over 2 years following February cold snap." They are probably adding the monthly fee over 2 years to everyone connected to natural gas it does not matter if you actually were there or used energy. Last I heard it looked to be approved.

Thanks, interesting article. I'm not a power guy and I don't understand why the frequency of the grid would drop if it was over-loaded. The voltage - yes, that happens all the time - but I thought the frequency was always 60.0 no matter what. Maybe it's due to the fact that it was so very close to just failing completely. Pretty scary unless TX gets it's act together and updates its power systems.

I think the 2021 texas power outage was one more fork in the road, some people said it was proof that they need more fossil power, others that more renewable was needed. And there are examples of individuals reacting in both ways for each camp to point to, some people with the new ford F150 with powerboost hybrid served them well running the flat screen and coffee pot on 1/4 tank of gasoline, others lived in their Teslas or had power walls. both solutions out of the reach of a lot of people due to the cost.

Being that part of the problem was that gas well heads and pumping stations froze, and the power outage knocked off so many petrochemical plants. which then in turn raised prices for NG in the network that Texas distributes to, and now gasoline and plastics prices are up for everybody. But that the rest of the county is depending on, and pumping money into this situation in normal times, that is really the background problem. Texas seems to have a few calamities a year, why do we put up with this? my casual observation is that every hurricane that could hit the gulf sends oil traders into a frenzy and the speculation drives prices up.

https://www.wsj.com/articles/one-week-t ... 1615973401
With WSJ if you cannot read it, try stop loading the page before the banner comes up, or click F12 and point select then delete the html code that is active for the banner to read the text. 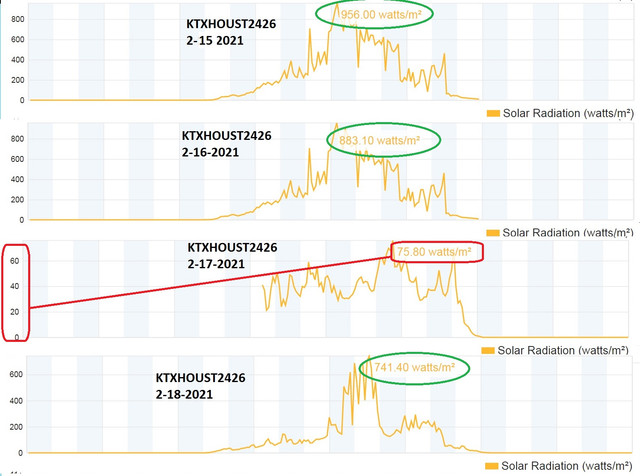 Here is weather station data from Houston and it has good sun for 3 out of the 4 days. In my experience a few hours over 300w/m2 will put a meaningful amount of power in an off-grid battery. Texas had 4 hours of good sun on the 15th and 16th, the 17th was bad, and then the 18th was about 2 hours worth. A Tesla solar + powerwall customer or solar off-grider would have been well taken care of. When the storm they call "Uri" came though Ohio we had single day record setting snow at 14" while we didn't get the sun Texas did, I charged up my home battery and car the evening before just in case we had an outage. That didn't happen, and i simply used that power up with only a small loss from putting the energy in and out of the battery. I also have a propane generator that can charge my battery if i could not have used the grid.


I made a video that showed this power outage roughly every 6 hours or so made from screen captures on poweroutage.us. Its cool that I can see the waves of storms not in radar, but reported outages. https://youtu.be/vO-bMLIUrdc

Just saw this news article that the Texas legislator has bundled winterization goals, which are good, to fees on renewables. thoughts?

"State Sen. Charles Schwertner, R-Georgetown, said while wind and solar have expanded in Texas, those are “unreliable” sources of energy because they cannot be called up at a moment’s notice during an emergency like the freeze in February.

To correct that, Schwertner said his bill will give the state’s grid monitor authority to create fees for solar and wind. As it stands now, he said billions of dollars in federal subsidies to wind and solar companies have “tilted” the market too much to benefit those sources of energy, and he aims to re-balance it."

In any other state, that would be a poison pill. In Texas, they'll be yelling "Poison the bastids!"
Brilliant Silver 2021 Leaf SV40 W/ Pro Pilot & Protection
2009 Vectrix VX-1 W/18 Leaf modules, & 2 lithium E-bicycles.
BAFX OBDII Dongle
PLEASE don't PM me with Leaf questions. Just post in the topic that seems most appropriate.

ripple4 wrote: ↑
Wed Mar 31, 2021 4:55 pm
Just saw this news article that the Texas legislator has bundled winterization goals, which are good, to fees on renewables. thoughts?

Appears that "winterization" might have helped the unusual situation:
https://pjmedia.com/news-and-politics/b ... e-n1426904
I don't have a good reading on subsidies, fees, tax incentives, etc. and how they affect the choices of building back a robust grid system regulated by ERCOT. What I do know is that charging $9 per kWH is a form of gouging that obviously does little to improve the ERCOT based grid. LIkely they pocketed most these windfalls for their own use.
IMO, if Fed/State Governments are ever going to keep the "politics" to a minimum and base decisions consistently two major issues must be resolved:
1. Some type of carbon tax or incentive is likely required that is consistent and has some "scientific" basis (good luck!)
2. Highly detailed life cycle costs must be considered for each decision of a new energy producer (obviously including the cost of "winterization" in parts of TX wind was needed). This must include some type of "carbon" cost.

Again (IMO), the solutions to such future crises is addressing each new generation installation based on their own particular issues which is quite different area by area. Getting the money/power grab out of this is probably the most difficult.
2012 Leaf SL
2021 Leaf SV Plus
Post Reply
Load more posts
23 posts