I'm happy with my new leaf, in fact I think it will be the best car I've ever owned, but I almost didn't buy it. I won't mention the dealer because I don't think they're to blame. I think it's the lack of training from Nissan. I bought it in November and they told me I'd get it in January. I asked them about home chargers, but they didn't really know what power I needed at home. I told them I wouldn't buy the car unless I knew I could charge my car at home and they told me they'd get a company to install a unit. I asked many other questions such as how the service station chargers work, or what the range would be like if I did mostly motorway driving and how it would perform in the cold. There were many more EV related questions. They couldn't answer any. On the test drive they couldn't tell me if I could use the auto pilot in traffic jams.

At the beginning of January I asked for the name of the company installing the charger as I wanted to make sure I had the right supply and they told me they couldn't tell me until the had the reg number for the car (??!!). I told that I may nee to instal another fuse box and it would hold everything up. All I wanted was to speak to someone who could give me advice. In the end the car turned up sometime in Jan, but it took until 20th Jan to actually take possession of the car, because, you guessed it, the installation of the charger held everything up.

When going over the car during the handing over process, There were still many questions unanswered, because no one in the dealership seemed to know. I was shown the manual and in the end gave up and thought I'd leave it to forums. My first drive (after the drive home from the dealership was from Bristol to London (about 220 miles) I didn't have range anxiety, but I certainly had charger anxiety. The first one I tried would charge for two mins then deactivate (annoying because myself and my wife went off and had a drink for 30mins and came back to it not charged). When I did find a fast charger, it took me ages to work out what one to use and how to pay for it (turned out it was free). I'd been given no information about chargers.

To sum up, I'm confident with new technology and at the end of the day I knew I could find out most of the questions by myself, but the point is, how many people have been freaked out by the thought of the perceived huge change from fuel to electric and not bought a Leaf because they didn't feel supported? As it turns out I think everything will be fine for me and I love the car, but I did feel pretty alone and certainly had no peace of mind until I got home from London yesterday. I feel confident now, but I had to go through the process myself.

Please train your dealers so that they know the leaf inside and out and show a bit of empathy towards new EV converts, who do not know or understand the new world they are stepping in to.

The reality is that we are still not even to the "Early Adopter" stage of this technology adoption curve. Among other things it means that user experience will often be like yours where it is left up to you to gain effective knowledge on your own, and from other enthusiasts. There's tons of info here in this forum. 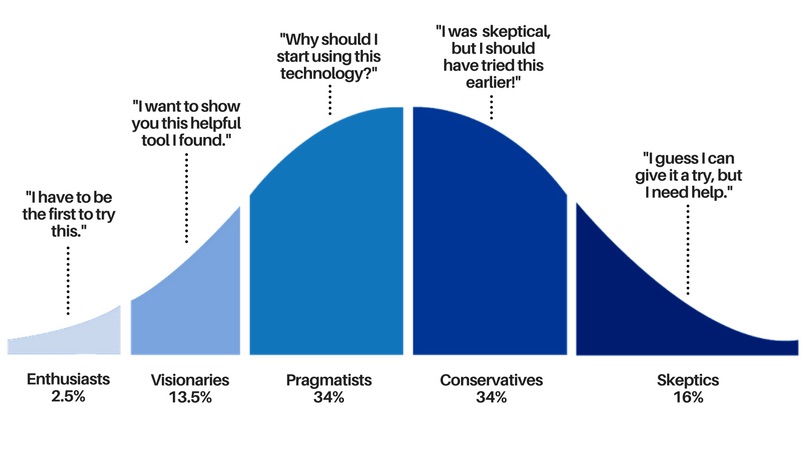 The reality is that we are still not even to the "Early Adopter" stage of this technology adoption curve.

So you are saying we are nine years into this and the dealer experience has not improved.
Who could have thought this would happen

I note that you are in the UK.
While you are welcome to seek advice here and share your experiences, I recommend that you also visit https://www.speakev.com/forums/nissan-leaf40.273/ which is based in the UK. You'll find much more information related to the local charging scene, dealer issues, etc.
- Chris
----------
2017 SV, purchased 8/10/19, Coulis red
Post Reply
Load more posts
6 posts • Page 1 of 1

Return to “Suggestions for Nissan”