They are more expensive than parts.com.

hbleaf wrote:MY 2011 SL Leaf needs a new inner tie rod, ours has a slight bend in it and the alignment shop recommends replacing it. Unfortunately Nissan does not supply just the inner tie rods but rather sells the whole steering bearing assembly for $1600!!!! Yikes!!!

All I need is one inner tie rod. Anyone have an extra or know where I can get one? Maybe the Juke or Versa inner tie rods will work? Any ideas! Meanwhile don't bend a tie rod.

100% ditto on this exact, to the letter, problem I'm having right now with my 2011 LEAF SL. Hit a curb doing a little irresponsible stunt driving, which mutilated the control arm (easily found online for $100, bought and installed), but also tweaked the inner tie rod on the passenger side to a nice 30-45 degree angle. It's just a straight rod going into a flexible boot coupling - but having looked at it and felt how it's put together, it might not even be a removable/replaceable component of the steering system.

Kinda worried about this one, because I'm definitely not chucking up $1600-2000 for a whole replacement gear assembly over one bent end rod. But figure I should throw my hat into this thread as a "me too!". I'll check around eBay, I sure hope there's one out there...

FalconFour wrote:Kinda worried about this one, because I'm definitely not chucking up $1600-2000 for a whole replacement gear assembly over one bent end rod. But figure I should throw my hat into this thread as a "me too!". I'll check around eBay, I sure hope there's one out there...

I would contact one of the vendors on eBay or elsewhere, who has acquired a wrecked LEAF for parts. With a little luck they will have a rod in good condition.

by FalconFour
Just scoured the internet high and low and - as half-expected - nothing at all can be found for inner tie rods on a LEAF. There's the steering gear assembly sold as a complete unit ($2,000), then there's the outer tie rods that screw onto the assembly ($70 ish, but not what I need). Crapcrapcrap.

1) can this rod be bent back straight again with some clever application of heat and force? I don't imagine it needs to be perfectly straight, just better than a screwy angle that's being compensated for by the flexible coupling. If it can be bent, it can be un-bent, right?
2) if not, how/where would I go about trying to find a scrap part online? Not sure where to even begin looking... on eBay for wrecked LEAFs? Don't think I could ask for parts off something a guy's already selling in a listing, though...

FalconFour wrote:Don't think I could ask for parts off something a guy's already selling in a listing, though...

That's not what I meant. Try to find someone who has apparently acquired a wrecked LEAF and is parting it out. Like this place for example.

by FalconFour
Oh, awesome. Now I see what you mean. Sounds like a plan!

by FalconFour
Found out that the inner tie rod *IS* shop-replaceable, built just like every other Nissan model works, and is just consciously omitted from all known parts databases, as if Nissan just decided not to publish those parts (or that aftermarket manufacturers/distributors didn't feel like listing/maintaining that part, not 100% sure on how that works). Either way, there are near-identical-looking inner tie rods for EVERY other Nissan model made in 2011-2012, but none for the LEAF.

We just took a torch to it and bent it back to near-perfect alignment in a vice. It becomes very easy to bend with just a bit of torch heat, bends back straight, then dumped water on it to cool and stabilize it again. My suspension is almost back to new, and I just need to bring it back later to finish the alignment on a machine. And clean the red curb paint marks off the wheel.

The Leaf FB page replied to my post as well, saying I should try the dealership for parts and to post back with the progress (and/or result of asking the dealership). I'll probably do that after I clean off the curb paint though.

by smh342
can you share any details on how to replace inner tie rod ends? I have a 2015 and they still don't list these as serviceable parts. Looking at the assembly it seems these attach inside of the steering rack somewhere... I heated and bent mine back only to find it bent out of shape again by what I can only imagine is the winter time potholes and poor road surfaces.

I just wanted to reply to this post by saying that I had hit a pothole a couple of weeks ago and I also bent my front inner tie rod. I was quoted by the dealership at a cost of about $1,380.00 for the steering rack with $300.00 in labor cost.

I stumbled across this forum by accident and I was encouraged to search for a cheaper option. After a lot of searching I have finally found the solution. Any one that encounters this problem in the future can do a search on Ebay for "Dorman front inner Tie rod end" or just enter the item number "523-243" hit enter and presto!!! The part fit on my 2013 Nissan Leaf and it works perfectly fine now. It cost me only $30.15 including shipping, labor was $139.00. Personally I would much rather pay $169.15 as opposed to $1,680.00 for my repair. I was so happy that I found that part and took a chance as it says it fits 2011-2012. I can only vouch for the 2013 model year, however, I think its worth a shot for anyone with this problem to try the part out before anything else.

I hope this helps anyone in the future that encounters this problem. Be safe on those roads!!!

by mywaracfirfoyff
I had the exact same problem (bent inner tie rod) on my 2015 LEAF. I ordered The Dorman 523-243 replacement.
It was not compatible. The threads on the steering rack side are larger and much finer than the ones on the original. 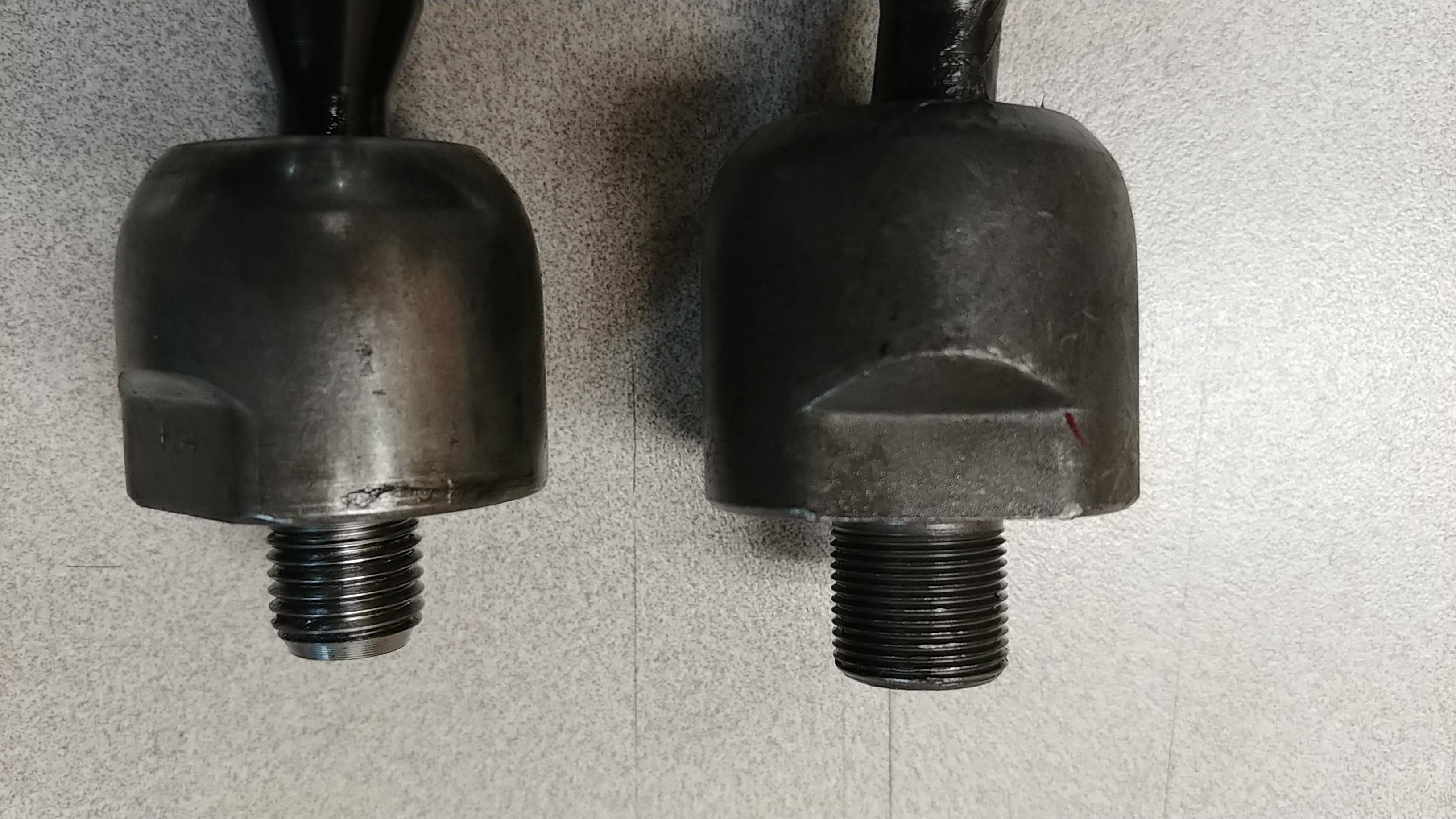