*edit...I did this trip again this year, using two different L2 chargers on the way up. The lake wasn't as full as the year before. 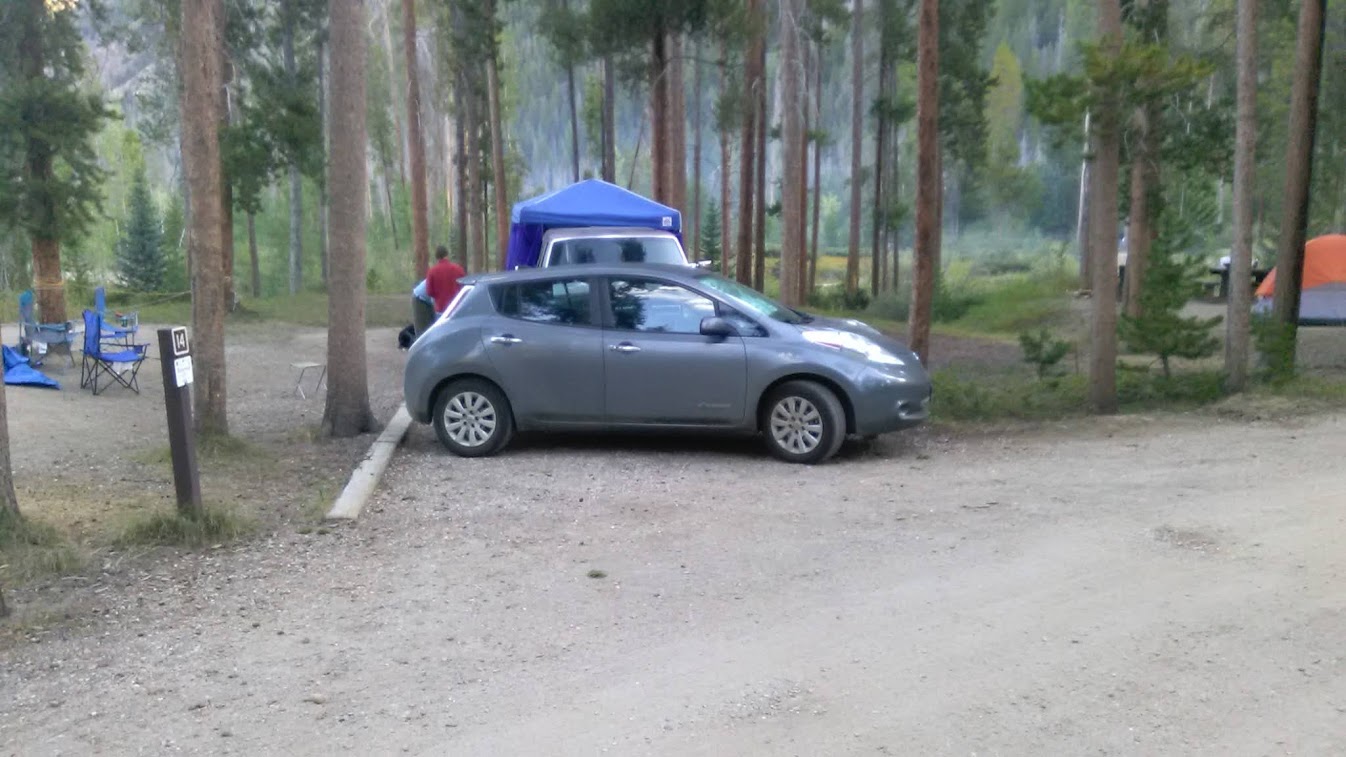 My main adventure this summer was to meet my bluegrass-picking friends at a campground on Lake Grandby (125 miles each way, and ~6,000 ft elevation range) over Labor Day weekend. All the away-from-home charging was free L2.

I rolled onto the dusty county roads south of Fort Lupton with 99% charge, crossed the Denver metro area, and boosted from 63-86% at the Holiday Inn Express in Golden, where I-70 starts to climb. I would have made it to Idaho Springs with reserve, but wanted to play it safe, and it ended up working much better with Beau Jo's Pizza's (Idaho Springs) 2-hour charging guideline. 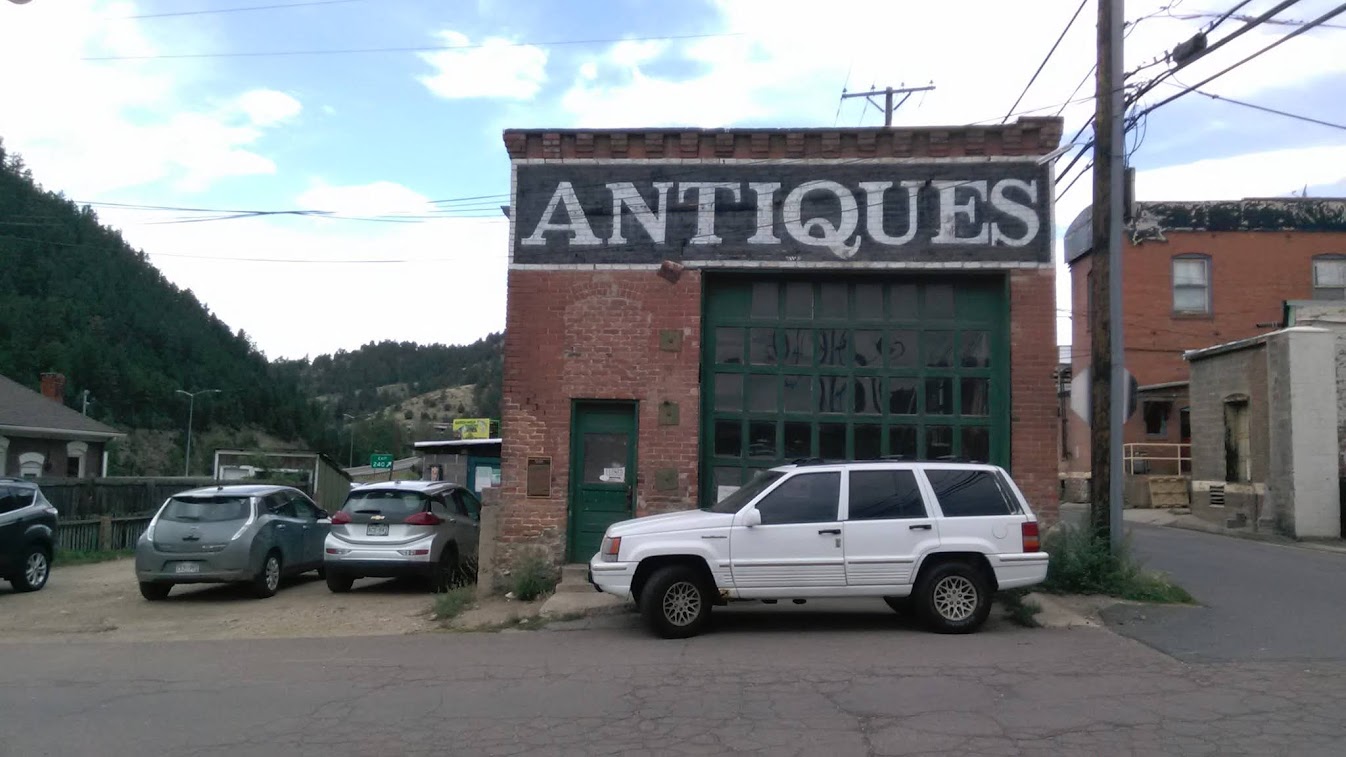 I pulled into Beau Jo's with 62% after accidentally exploring some alleys, and one of the two plugs was available. I started a charge, sidled up to the bar and ordered a pie (the "hipster", of course (banana peppers, pineapple, and ricotta), on the crispy "prairie" crust). When I started to imagine my arteries clogging, I gathered the leftovers, paid my tab, and scoped out the walk to the historic waterwheel on the other side of the interstate (I'd seen it countless times passing through, but never up close). A surprise on the way was a narrow-gauge steam locomotive and passenger car on display I never knew were there! After playing tourist, I returned to Lexie and was pleased with the 97% charge. I entered the interstate feeling rested and comfortable, and exited to the town of Empire. 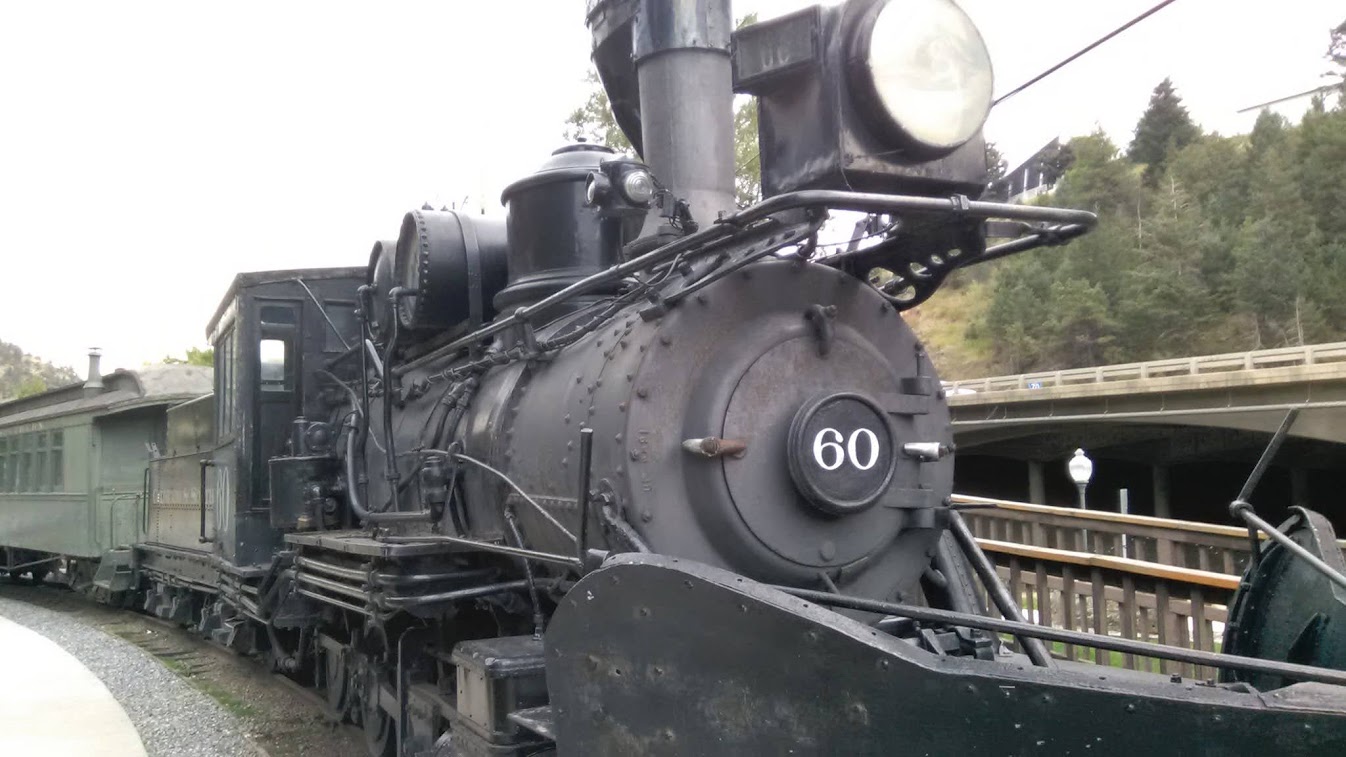 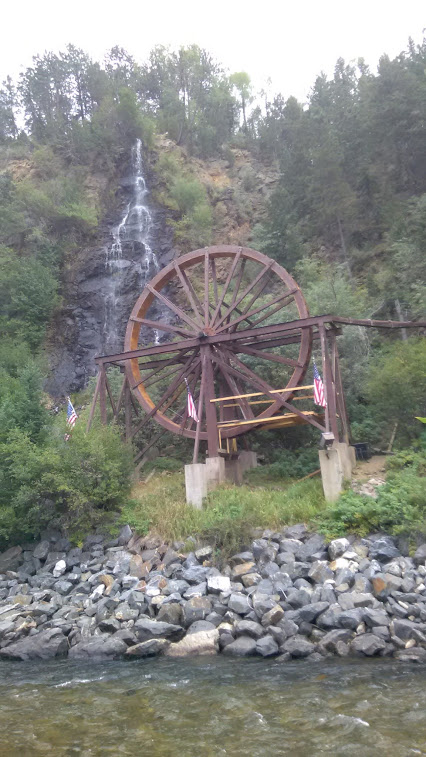 Traversing the Berthoud Pass 11,306' summit was enjoyable and used 30% (not factoring the 5% back on the way down). I rolled into the town of Winter Park with 60%. Just outside the parking garage with 2 plugs is a nice commons area with a stone fountain, bronze sculptures, flowerpots, and games. I had the good/bad fortune, depending on how you look at it, of discovering a quaint coffee shop that had gelato...and fudge, which absolutely needed a cappuccino to go with them. I nodded off a few times under an umbrella (I guess the gelato won) after watching birds bathe in the fountain. "What a rough way to travel," I thought.

Lexie showed 94% charge when I left town, and I got to the Arapahoe Bay campground with 70%, scoped out the lake access for paddleboarding, and started pitching the tent. The sign wasn't kidding that the tent pads were "hardened." I created modern art with tent pegs until I managed to get enough in the ground that I didn't think I'd have to chase across the campground in the wind, and was very grateful that the mosquitos weren't as bad as the previous weekend near Elbert, Colorado.

It sure was great to be off the grid for a few days, and hopefully the other campers didn't mind the picking, fiddling, and singing too much. One of the highlights was abandoning my shame, picking up an upright fiddle and giggling my way through a version of "All About That Bass," which the kids in camp requested again later that night. 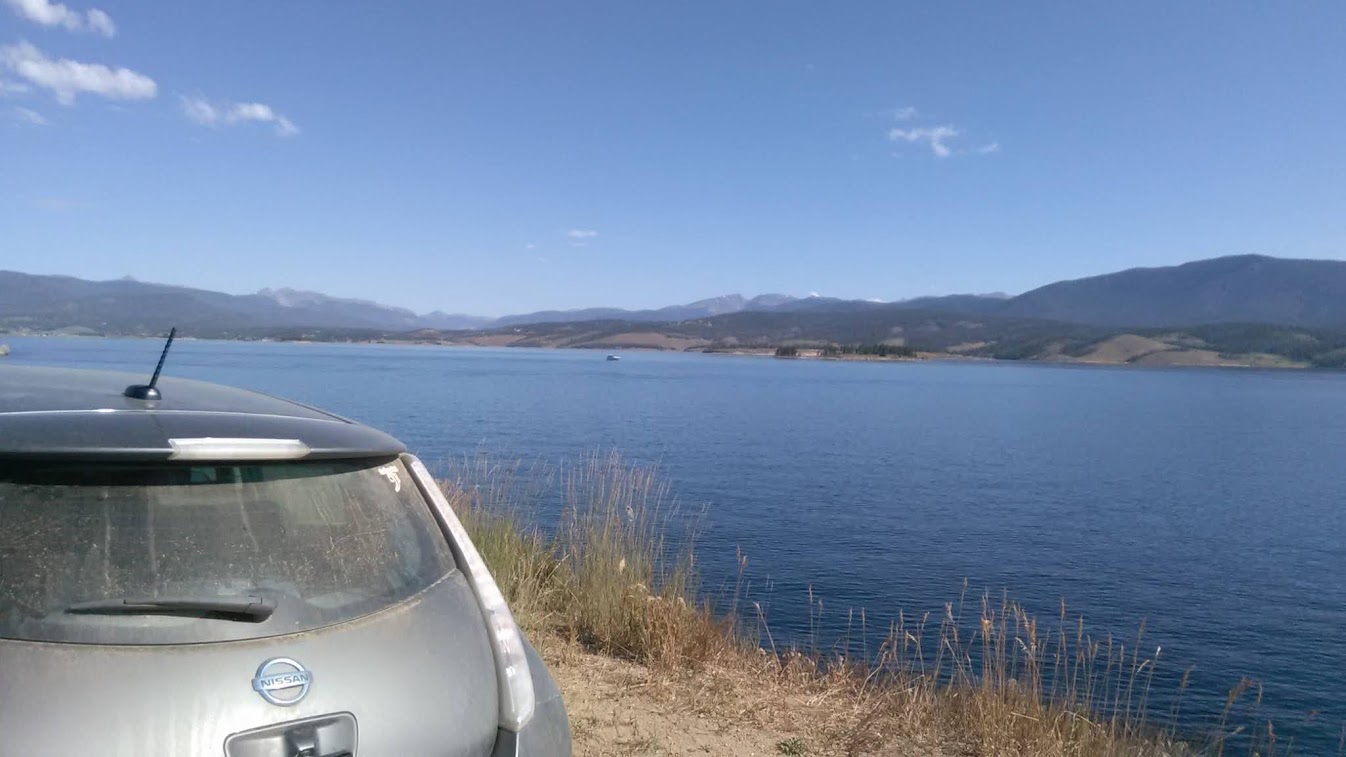 Packing up and rolling out on a chilly Monday morning after lots of picking and paddling with the bluegrassers was bittersweet, but the winding road along the lake afforded some nice views. Traffic started to crawl before Winter Park and I was worried that's how it would be all the way home. I was assessing the bottles and containers within reach for emergency relief when traffic opened up after a light. The surprising number of EVs in town (which I would normally be overjoyed to see) made me wonder if any plugs would be available. I arrived at The Foundry station with 40% and one plug was available, so I started a charge and went back into tourist mode. I was crumbling feta cheese onto a wheat roll with hummus when a text came in saying charging had stopped. Uh-oh. I tried to restart the charge a few times, but was just mocked by three flashing blue lights on the dash. Lexie had gotten to 72% (which turns out would have gotten me home) but considering the unknown drive back, I wanted some more. I explained the situation to a Model 3 driver who arrived, and wished him success. Fortunately, the parking garage station had one plug available and got me to 90% (after more requisite gelato).

The climb back up Berthoud Pass was nice and open but traffic slowed to a crawl at the top. I was comfy though, had plenty of animal crackers, 70% charge, and the outside air was deliciously cool. Regen at the slow speed worked better than I expected, and I got back 6% charge on the crawl down to Empire.

I-70 moved much better than I predicted, but I didn't like how fast the outside thermometer was climbing! It was flirting with triple-digits as I descended to the front range. I had the Holiday Inn Express punched into the hand-me-down Garmin, but continued on the 92-mile leg and crunched to a stop in the gravel in front of the goat pen with 38% charge--thank you, elevation!