Well on our first full day of ownership we took the car to the Brier Creek Car Show. Talk about fitting in. Lamborghini, Ferrari, Porsche, Corvettes and 1 Nissan Leaf. Here's our album! 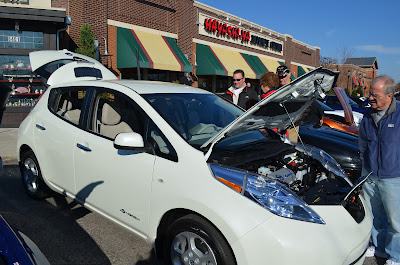 The pearl white looks nice, good choice, I hope to have mine later this week

harryjpowell wrote:Well on our first full day of ownership we took the car to the Brier Creek Car Show.

You need to give us a heads up next time you do something like that so we can come and drool all over your car! Very nice!
...Lance

All four are on the ChargePoint network map!

Its getting easier and easier to move around the state in our Leafs.

I'll probably be stopping by Whole Foods a lot more now. I noticed they had the charging stations on plugshare.

For those in Raleigh, I also contacted North Hills, Triangle Town Center, Crabtree Valley Mall and Cameron Village about charging stations and here are their responses:

Harry, are you talking about I-40 rest stop by Benson? That's about 120 miles away from me, still need another between Wilmington and Benson in order to make Raleigh........


The project includes two charging stations in Raleigh and connecting them to a solar photovoltaic (PV) array and battery system. When the sun is shining, the PV array produces electricity and charges either a plugged-in vehicle or the on-site battery.

I don't know if they will be open to the public though. But the release goes on to say this:


Progress Energy Carolinas and the City of Raleigh will use the two stations to charge their respective fleets of plug-in electric vehicles. Raleigh has installed 18 charging stations, nine for its fleet and nine for public use, and intends to install 15 additional public charging stations by the end of the year.

That's great news, although they're running out of time for "end of the year"! I think they are counting some stations that I would consider "private" as part of this count, such as ones at Nissan dealerships, the one at McDonalds in Cary, one at Qualcomm, etc.

Here is a link I found to an interactive map:

Yeah, that would be good to know, wouldn't it!

And actually as I re-read the e-mail I see it says they "anticipate full operation by the end of the week", so sounds like any time now!

Too bad it isn't available today though because I'm headed down there tonight. I was originally planning on taking the LEAF and would've charged to 100% last night so I had enough range after my wife's commute, but it sounded like there was going to be a huge crowd of us going down so we were going to take a bigger vehicle. But 2 people dropped out AND my wife had to work late tonight (not allowing a recharge) so it might be tight. A charging station would have worked out perfectly in this situation!
...Lance