48v at 410ah is a very impressive battery bank. Are you sure you don't want to go off grid?

I only have a little 24v 255ah warehouse tug battery for powering my water well setup.
"THE ABOVE POST CONTAINS MISLEADING AND INACCURATE INFORMATION. PLEASE CONSIDER IT OPINION, NOT FACT". -someone who I offended and is unable to produce the facts in question.

I would like to, but I would need a LOT more solar (and not much more space) and a lot more batteries. Most of our useage is the geothermal heat pump that pulls 5 kw running

The EVSE control box came in and opened it it up to find tie points on the board and documented where i got the signals. LED 2 did not have a test point, so i jumped on the current limiting resistor but it broke off, so i put in a through hole resistor to repair it, it was ugly, then i used black RTV to stick the wires to the board and that was mess too. I got a used j1772 handle and 20' cord off ebay and will connect it in to test it on the car. I don't have 240v at my soldering station, but i did have a 480/240 --> 120 .1KVA control transformer, I connected it backwards to power up the 240v only evse. if it works it works.

working on the code now, the flashing LEDs is a tricky angle i didn't expect, looks like i'll have to read the input twice, 1/2 second delayed, and see if its different between each reading. i'll put the code up once its done. 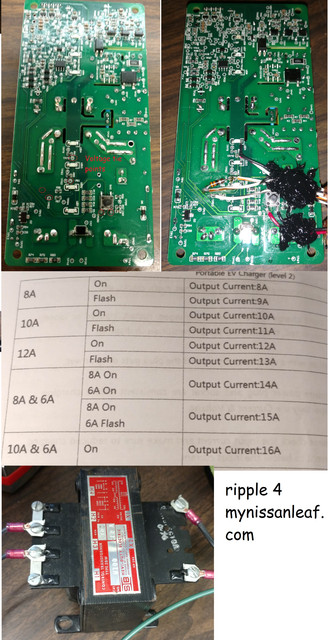 It works! today i plugged it in and it charges the car OK, so it functions as a EVSE which is the first requirement. the time delay between when the current is changed and the car changes its draw is between an instant and about 2 seconds, so very responsive to changes. the 6 interface pins are pulled into a round connector on the side so it can be disconnected. 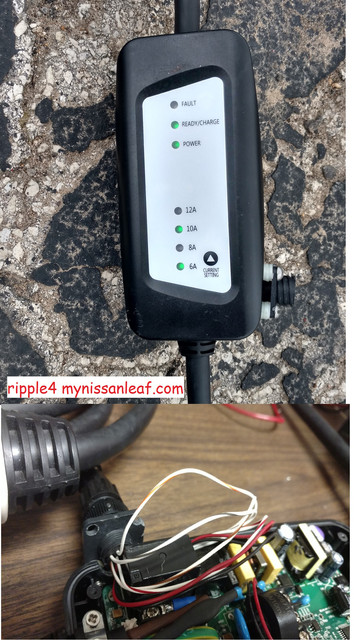 here is a youtube video of the controller adjusting the current up to the maximum. not all of the features have been tested. the clamp-over current sensor is giving me trouble, its a learning process.

the code is pretty well sorted out, getting the hall effect current sensor to read well was very tricky, had to use someone else's RMS calculations, but it reads very accurately now. the controller increases and decreases EVSE pilot signal commanded current to maximum available supply or the maximum EVSE current of 16a which ever is lower. in the code I have it setup for a 18 amp max, and if the current gets close to 18a it sets the current to 6amps, and then auto increases to 16 amps on the EVSE or until it reaches the maximum allowed current without going over. 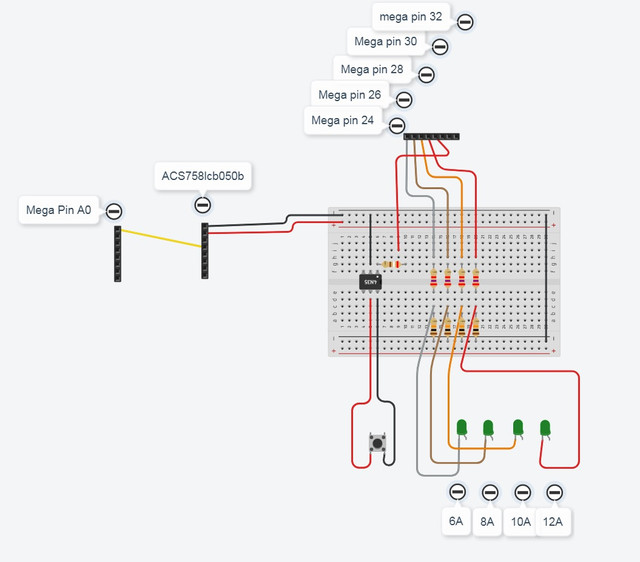 I have to simulate an AC current draw using a 10a variac and a load bank, but at least i am demonstrating getting the system to increase, decrease and hold a EVSE charge current.

Nice job ripple4. I would like to set up something like this at some point. I have a clipper creek EVSE, which is common hardware with some EVSEs supplied with older Volts. The EVSE can be modified by changing jumpers with a switch, https://www.gm-volt.com/threads/clipper ... st-4693261

I have set up a battery backup solar system with AC coupled panels and a pair of SMA Sunny Island inverters. When the SMAs decide the battery is up to charge, or to limit voltage from going above the target battery voltage, they raise the AC frequency in order to limit production from any AC coupled inverters. The scheme I'm thinking of is to modify the charger with some controller like an ESP32 to flip transistors for the jumpers, controlled by watching for increased frequency on the AC. If the AC frequency ramps up, turn up the charger to consume more solar power. Otherwise, ramp slowly down to the minimum setting of the EVSE.

Anyone done something similar?
2014 Leaf S Plus

Thanks, it was a fun learning opportunity. I used these tricks in a diffrent recent project (with clamp-over CTs) and had a leg up since i'd already done it once! I think this is why we don’t see many commercial products around this. Everyone is going to want something different, different inputs and sensor with different algorithms to act on. DIYers rule the world, because we make our own solutions exact to the need! I honestly have had this up and running for a while and I have never used it in its fully automatic mode because i don’t need to. I use the cars charge timer to soak up the afternoon sun, and then restart charging after midnight to reduce peak grid usage. Even then that’s only 4 days a week, since I don’t need to recharge quickly for the Monday commute. Maybe the 62kwh battery changes the math, but I measured that my car uses ~150kwh a month and my panels made 750kwh/month from 6-10 to 7-10-2020. So even if it was super fancy at optimizing the power flow, I’d still need to sink that surplus 600kwh. With phantom loads managed as best as I’m willing to, I can get base home load down to 650watts, and so the key thing was installing a window AC unit with a delay start timer, if its going to be >80F, I set it to start at 11am. And then let it run to 6pm or so, this reduces the cycling of the central AC so it never turns on, or down to once every 2 hours with these >95F days we have been having. with gird-tie it may not make a difference either way if you're net metered.

I’d love to upgrade to the 40 or 62kwh pack. looks like this process is taking off! i'm envious of the DIY pack upgrade!

Awesome, I have the 3 channel CAN bridge that i want to install and will download this code to try out.