A couple of suggestions/ideas:

1. Is there a way to mount this in the sunglasses case so that it can be hidden ? ( Even if the original swivelling cover would have to be removed, replaced with something else that could be used to hide/close it when parked. )

2. For an event that last 10hrs or more (e.g. L1 charging) you could use letters (A, B, C, etc) for the single digit indicating the hours.

With the sunglasses case open it blocks part of the view to the rear window. It also puts the display much closer to your eye. At first glance it does not seem to be a good fit. However, perhaps someone can come up with a clever solution.

How many max hours are you looking for? I use a 16 bit number to store the time so I have two options.

The current software has a max of 7:59:58 with 2 second resolution but it can be changed to one of the above. I just need to know which people prefer.

An L1 charge session could take 24 hours, so it's probably better to support 24 hour charge events than to have 1-second resolution.

You might add a 2-way multiplex chip controlled by an output pin to
select between the two CAN inputs.

If you do not intend to write to the CAN buses, the transceiver chips can
just be left in "listen" mode all the time.

Where did you find the rear right-angle hood for the OBD connector?

What input voltage range does your regulator chip accept?
What chip did you use?

Gary,
Both EV and CAR CAN chip outputs go to the CPU and can be software selected. So no need for another external chip. Remember, my CAN processor is all software so I can use any input pin to receiver CAN data.

Currently both CAN transceiver chips are left in listen mode but the rev 1.1 PCB does have the option to routine one of drivers to the CPU with a jumper. If I every get daring enough I might write some code to talk to the car.

The OBD connector is one I made from a straight one. It is cheaper than the standard right angle ($3 each) and I can add my own 4 twisted pair cable (CAT-5) going to the logic/display box and 4 wire cable (phone) going to the selector pot. I cut the connector just above the lower two screws that hold the hood together.

Here is a close-up of the install connector. It is about 1/4" shorter than the one you use and the cable exits right next to the socket. In the picture you can see how it could be routed directly up and inside the lower cover panel although I have not done this yet. The flat phone cable is on top with the round CAT-5 below. 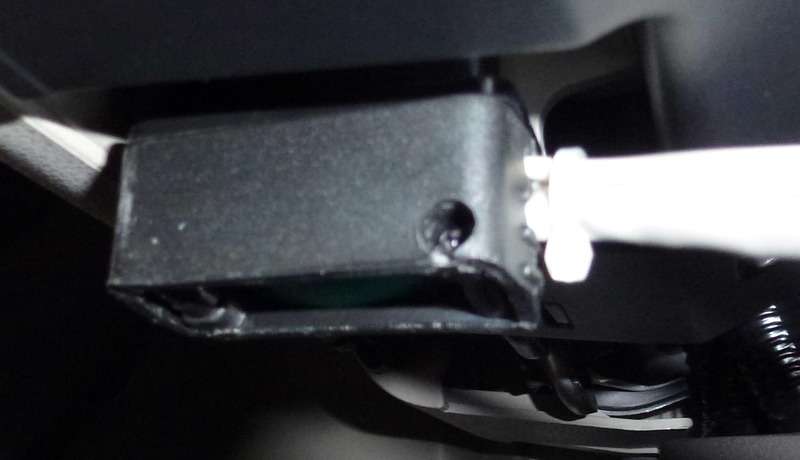 The DC-To-DC Converter Controller is a PJ34063 and is rated to operate in a range from 3 to 40 volts.

I just completed the full install with all wires hidden and mounted above the rearview mirror. The most difficult part was finding room in the center console for the rotary selector. From the top it looks like there is lots of room but when you turn it over and look at the back almost all is unusable. I had to do some cutting of plastic to make it fit.

Here is the completed cable set ready to be installed. 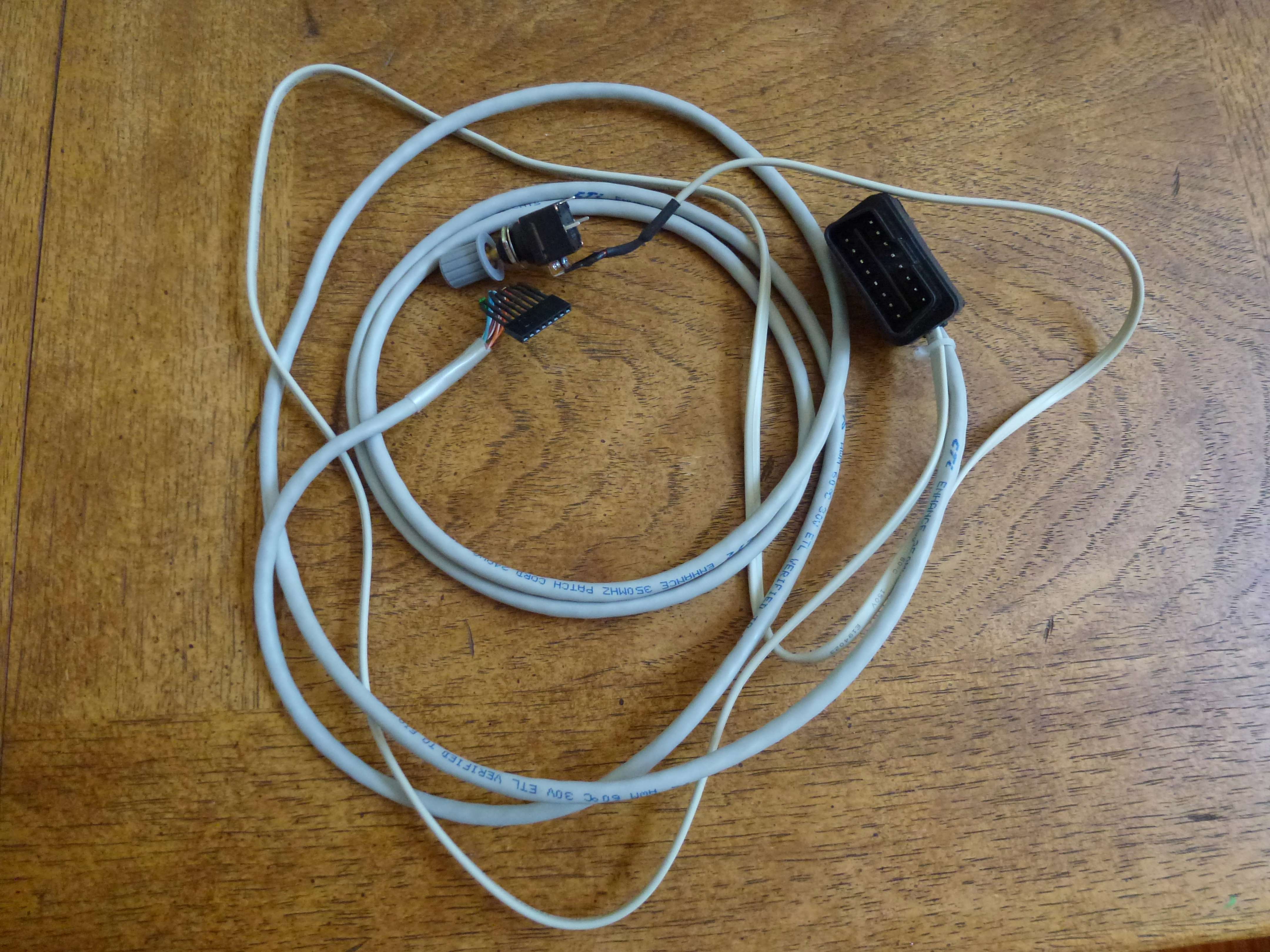 Here is what the OBDII connector looks like with the cable routed up out of the way. 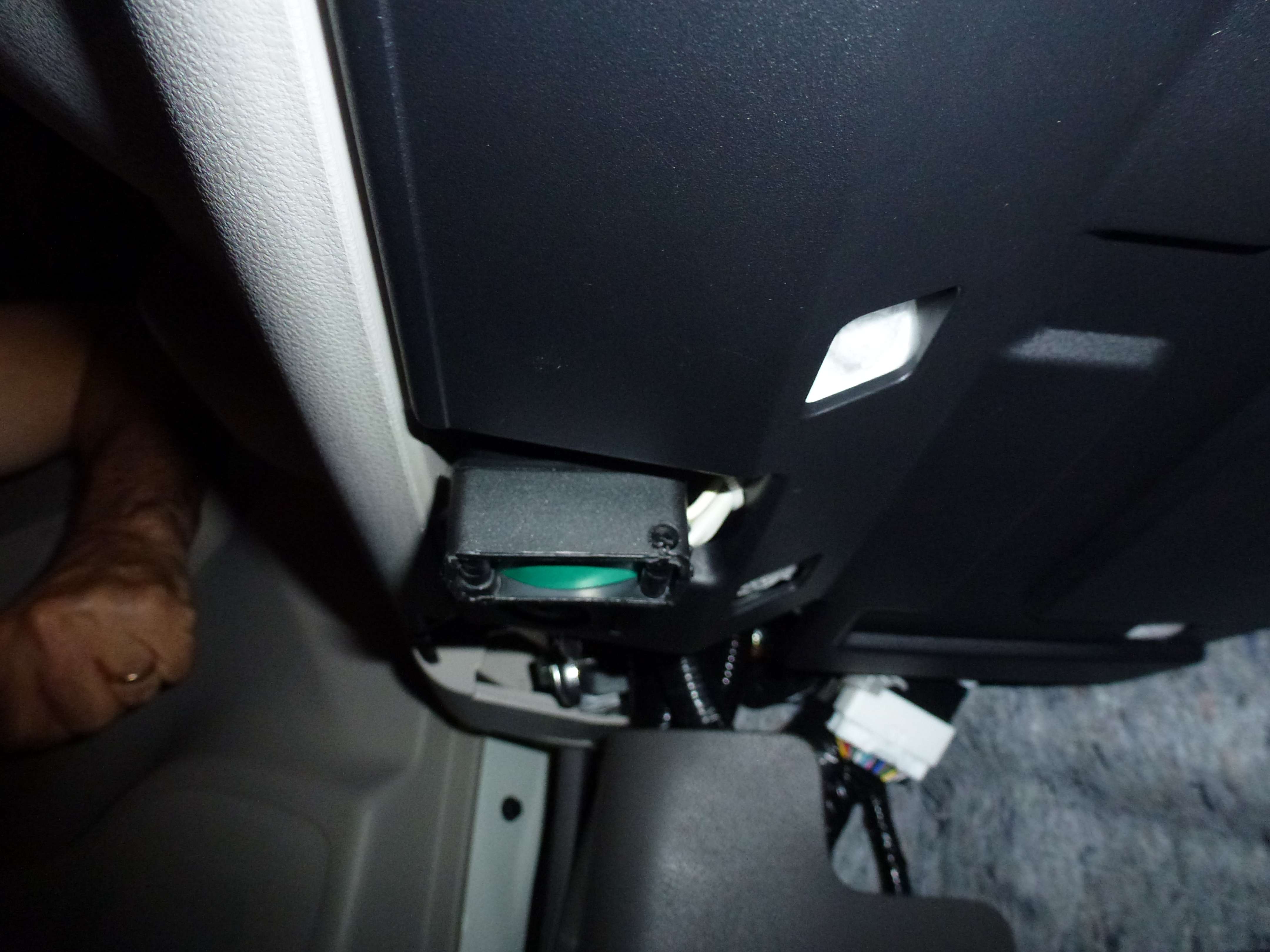 Here is a side view. Cable runs along headlining then down inside pillar next to windshield. 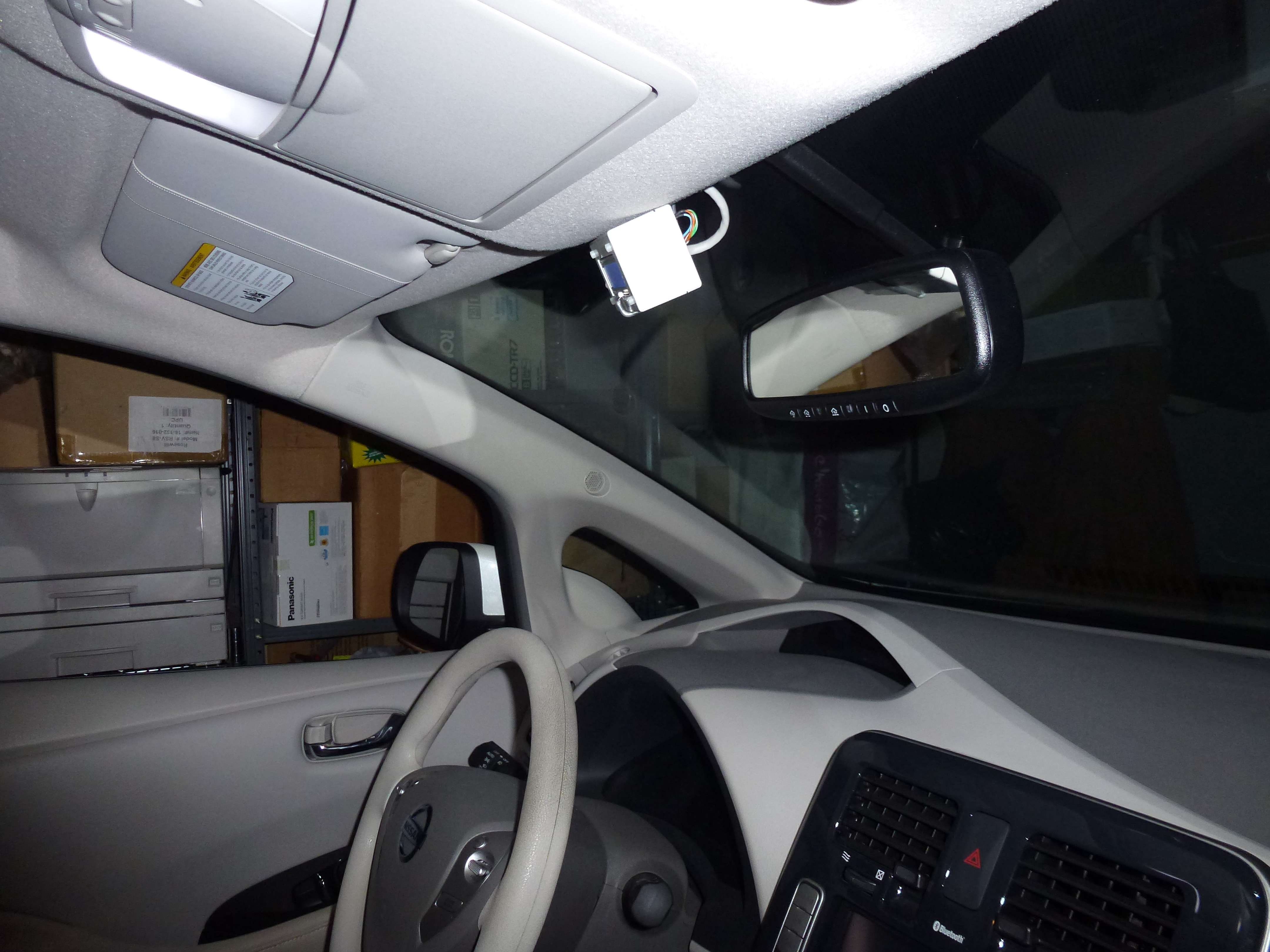 Finally the view from the driver’s seat. 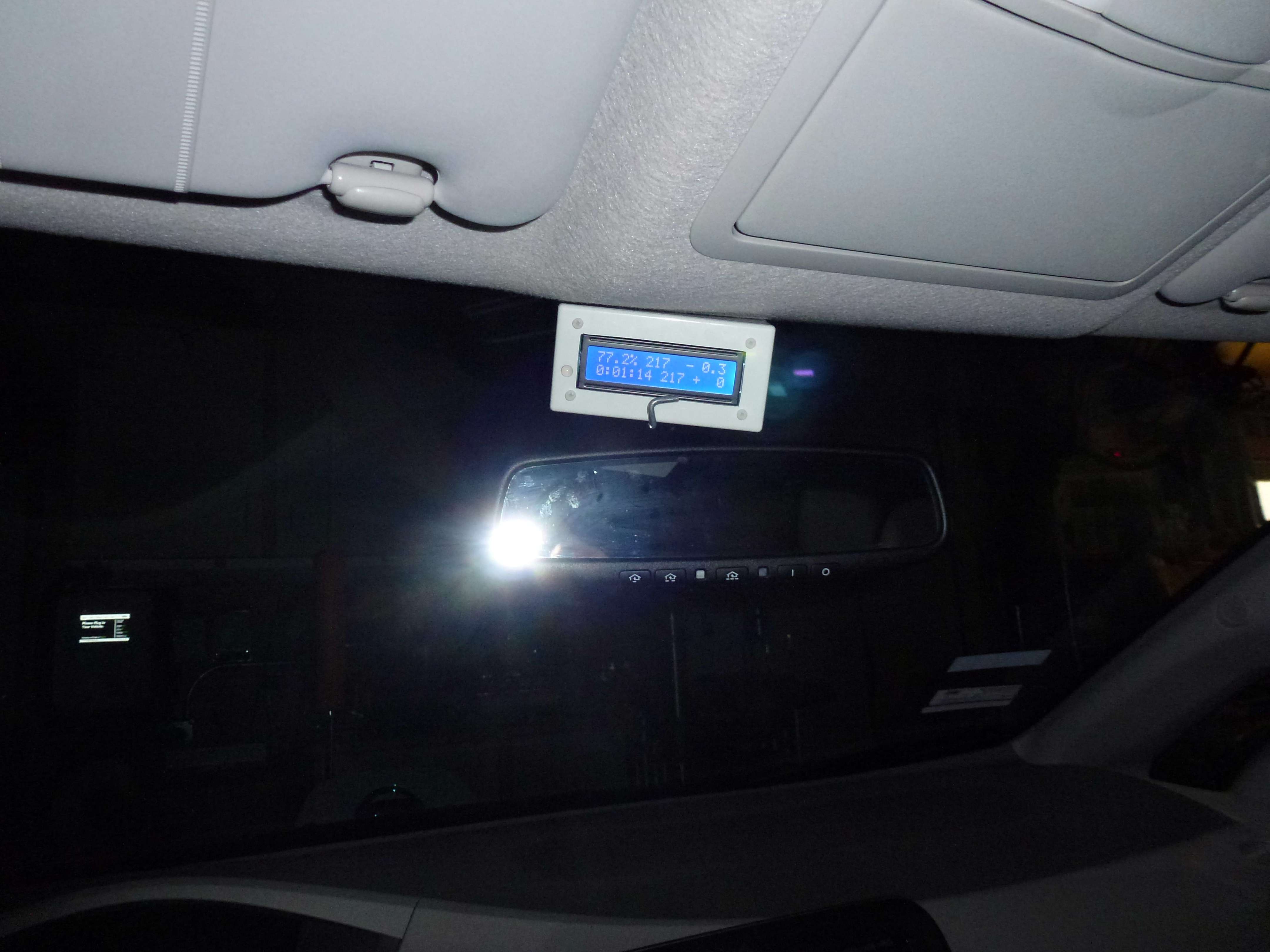 I will be taking it out for a test ride to see how well the hanger works.

Here is an option I just came up with for those who do not wish to drill a hole in your console to mount the rotary selector. This small (55x35x20mm) box can be mounted with Velcro within easy hand reach to the left side of the center console (between cup holder and shifter but on the side vertical surface). 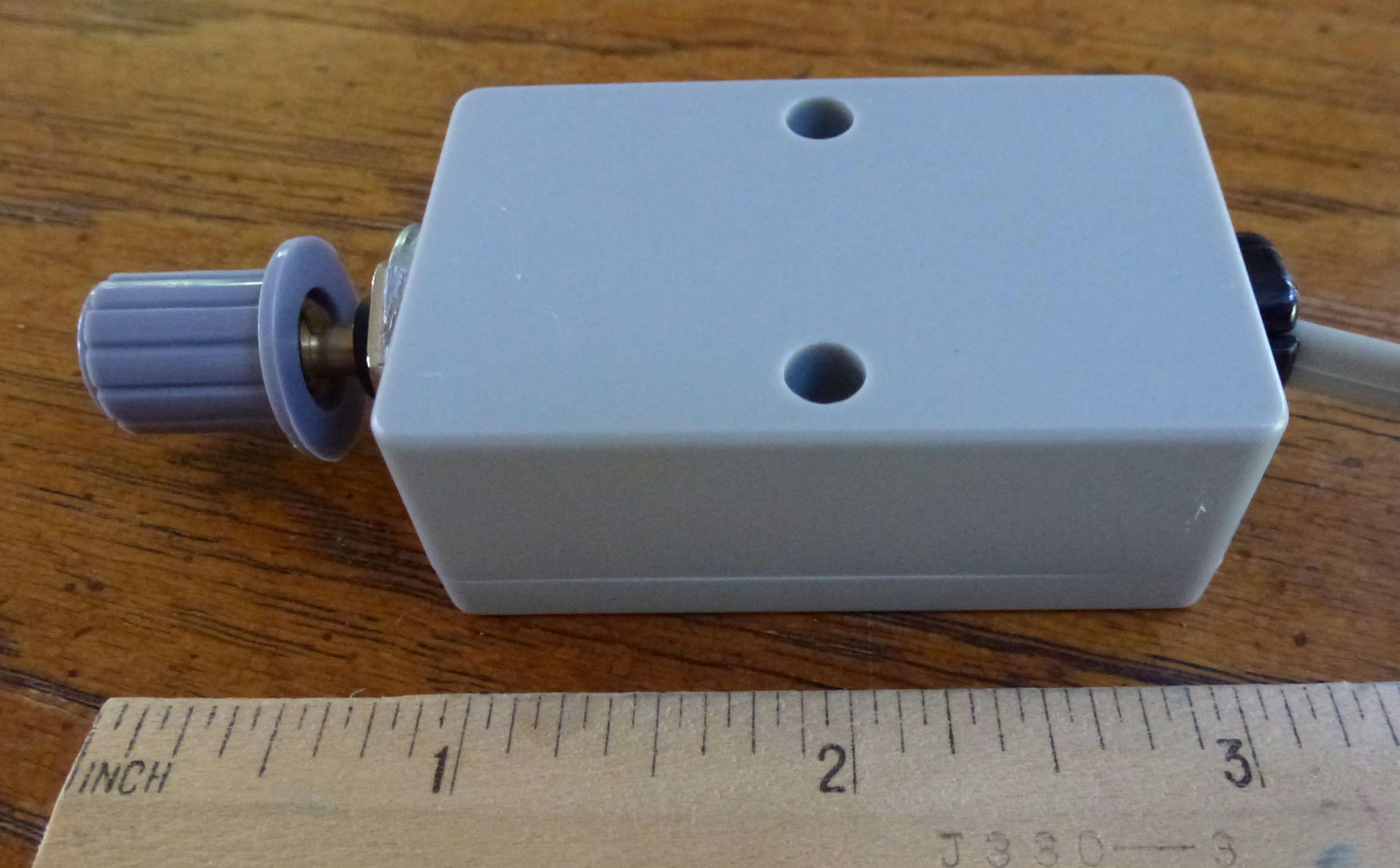 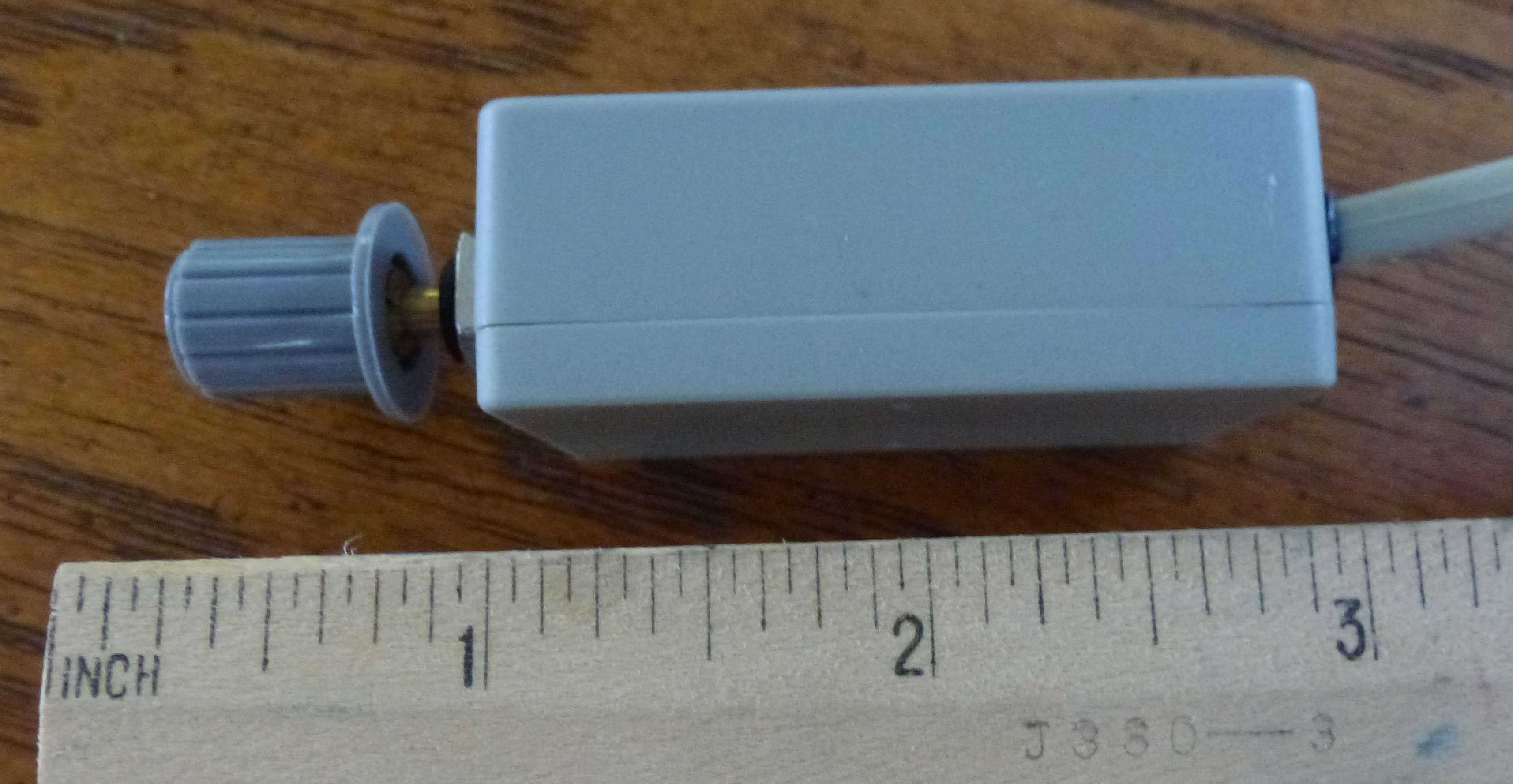 One issue I have had with the 2x16 LCD display has been not being able to read it while wearing polarized sunglasses. That may have been resolved today when my wife mentioned she was now able to read the display while driving with sunglasses. I had just finished building the last two prototype etched boards Sunday night and had swapped one into the Leaf for testing. The only difference from the first one was I had not removed the protective film they always place on LCD screens.

I went through the garbage and was able to retrieve the film I had removed from the previous screen. Testing with the old screen that had it removed confirmed that the screen was now readable with polarized glasses totally independent of orientation.

Any optical experts willing to explain why the plastic film has this effect?

The final etched boards with Bluetooth support will be here tomorrow (one week ahead of schedule).

My guess is that the thin piece of plastic is acting as a quarter wave retarder plate. We use these in 3D production to reduce the affects of polarized light and I suspect that it is having the same affect here.

Just before 1PM the package of production boards arrived on my door step.

Here it is out of the plastic pack. The six pin connector J3 on the right edge is for the Bluetooth module. Only four pins are normally used but the module supports two more. One is used for an external status LED. The board supports this extra pin with a resistor going to J6 which is just to the left under the left edge of C1 cap.

The back side now has all the surface mount parts.

This morning I finished assembling and testing the last of three pre-production boards. The last one had one etching problem where they left copper on that shorted out the DC-DC converter. It shorted +12v to +5v to Ground. It can’t get much worse than that. I did not catch it until I had soldered all the parts in and started testing the DC-DC converter section

After clearing the shorts the board came up find. But now I know to visually inspect each board before I start soldering and do a volt to ground check first.

The only part I am missing for the first production run of boards is the RGB LED. I found a place that sells them for $0.16 each instead of the $3.45 that Radio Shack wants. Hopefully they will arrive in the next couple of days. But the LED is the last thing to go on after the boards are assembled so I can start production now.