Updated the CAN msg doc with timing info (ms between messages) on the CAR CAN bus as observed with my 2012. Also updated a few timings on the EV can side too.

CAR CAN has some weird timings. The second highest priority message has a 100ms cycle time, while all the high priority messages around it are 10ms. There's a few different intervals used such as 20ms, 40ms, and 60 ms.

I also have notes on which CAR can messages are active when the car is off (for a short while) or in acc mode, but I'll leave that for tomorrow...
Former 2012 SL leasee (6/23/12 - 9/23/15)
Former Honda Fit EV leasee
Former Chevy Spark EV owner
Now driving Tesla Model 3

Per the service manual, the active fuel bars and charge time are sent via the VCM to the TCU for carwings. The VCM is the one that calculates the number of bars. On CAR CAN this is message 5B3, on EV CAN this is message 5B9 with a cycle time of 512ms. TickTock noted that 5A9 appeared after an update in 2012. It might be the TCU looks for any messages in the 5x9 range and forwards them on to the mothership.

I'm inclined to believe 5A9 is also sent from the VCM as it has the same cycle time (5A9 also appears on CAR CAN bus with different data).

I've updated the CAN message doc with the correct originator for 5B9 (previously I thought it was the BMS/LBC).

So I found an old PDF with Pipcecil's DTC freeze frame info from when he had the OBC failure back almost a year ago [thread here][PDF here]
A few things I've noted from this:
OBC amperage is shown only as a single digit (8A), not a lot of precision there.
Available HV Battery power is 110kW, which matches EV CAN message 1DC byte 0.
"Chargeable Pwr MAX" for L2 charging is somewhere around 32kW
Regen Power is a separate value than chargeable power, and is a hilarious error of 256kW during charging (so probably a byte and an extra nibble bit on a message).
Coolant temp was 60F and charger temp was 70F so the temp sensor for the charger is probably not on the heatsink (probably on the control board) since the charger had just started up.
The quick charger voltage sensor is pretty accurate (maybe) with 3 digits after the decimal (5 sig figs!).
"VCM State" is listed as 130, which is what message 1F2 byte 5 is on my leaf when L2 charging.

I previously suspected that 1F2 was from the VCM, and after going through some logs and consulting the "EVC" section of the service manual, I've confirmed that byte 5 on 1F2 is the VCM state and thus the message is coming from the VCM.

A few small puzzle pieces have found their place.

I unplugged my CC module and booted the car and watched the EV CAN bus. Messages 54A-54F disappear, and notably the last "mystery" messages (50A-50C) don't disappear. I took a log which didn't save because my laptop crashed when I powered off the car. Oh well... Someone else can give their center panel a tug.

Notably, when you boot without the CC the car you get: no temp in the eyebrow (understandable since it comes from the CC), no GOM (three dashes that are solid, not blinking), cooling fan goes to maximum (CC sends cooling fan request to VCM for condenser heat removal), and the EV system light (car with a ! in it) is illuminated. You also set a bunch of DTC's (which I cleared with LeafSpy Pro) and when rebooting the car with the CC module attached, you'll get a blinking front defrost button before the system resets to 75 degrees, auto mode, fresh air, and feet.

I also found the following goodies on the 54B message:

I also noted that message 50A byte 3 has a slow increase with AC on, and a slow decrease after AC is turned off. It *might* be related to CAR CAN message 50A which has what we believe as low side pressure of the AC compressor. If that's the case, 50A-50C are from the VCM to the Climate Control. Can someone with logs of both busses compare the pair of 50A messages?

Message 50A is identical on EV and CAR CAN. I'm 99% sure it's from the VCM. Since 50A-50C don't disappear with the climate module disconnected and they are sent one right after another, I believe they are coming from the VCM.

I also found that for 2011-2012 cars (with the Nichicon charger) message 5BF byte 3 has the HV bus voltage as seen by the charger. There is 260 offset, no scale factor (1V resolution). Note that unless you are charging or QC'ing the charger is disconnected from the bus and you should see nearly 0 volts.
Former 2012 SL leasee (6/23/12 - 9/23/15)
Former Honda Fit EV leasee
Former Chevy Spark EV owner
Now driving Tesla Model 3

Anyone tried messing around with one of these cheap dual channel CAN adapters? Like a lot of these cheap clones seems to be sold under many different names, decided to go with this one as at least its shipped from US.
http://www.ebay.com/itm/281242431345?_t ... EBIDX%3AIT" onclick="window.open(this.href);return false;

This is my first foray into CAN, but for $50 decided to give it a shot. Kind of intrigued by the relay capability. Seems like that would let you insert the adapter between a controller and the rest of the bus and monitor what's getting passed in each direction without disturbing traffic. Maybe, if it can keep up with the flow I guess. Might be even more interesting if you can intercept and modify specific messages while relaying everything else unchanged.

FYI, got my adapter working. Using cat5e cable, and currently just sticking ends into the OBD port connectors. Got the channel on the EV-CAN showing clean data, but still have errors on the CAR-CAN. Assuming just contact issues. Need to get a cable built up. Would also like to eventually experiment with isolating various controllers using the relay mode and looking at which specific messages originate from each controller. That may have to wait until the system is out of the Leaf though.
Rob 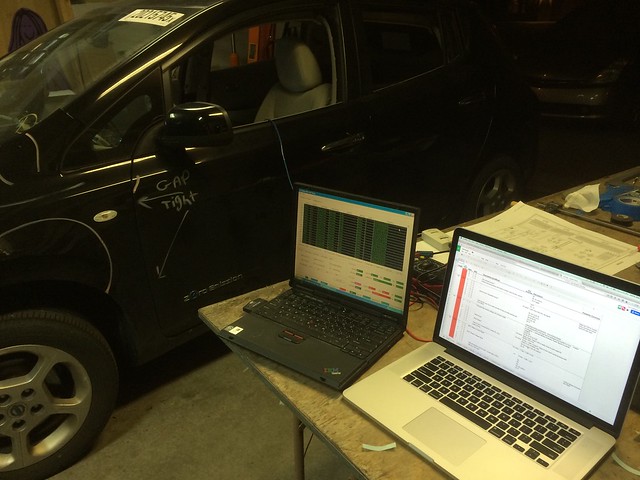