voltamps wrote: ↑
Sat Jun 19, 2021 6:00 pm
Wonder if Valvoline ULV is doing something to lower the gear surface friction to work with the lower viscosity , as in the chemical film (moly, boron, esters(?)) at the contacts. ..... Anyway, the results are what they are, even though I can't quite see how the "small" visc difference alone accounts for the benefits, both in range & operating temperature.

Yeah, it makes me wonder what is in the Nissan Matic S formula. Blackstone Labs shows it to be fine for what it does. If you are running thicker oil and still getting good numbers, it might come down to the quality of the oil itself. Maybe it is more than just viscosity alone but as you said, something else that is helping it to run cooler. I'm not a chemical engineer, so I don't know if viscosity is the main factor or if a lot of other unknown variables play into helping the efficiency of the gear oil.
2020 Leaf SL Plus - (Manufacture Date March 2020)
2013 Leaf SV (8 faithful years of service before trade in at 75,679 miles)
Timekoin - The World's Most Energy Efficient Encrypted Digital Currency

voltamps wrote: ↑
Sat Jun 19, 2021 7:11 pm
Yes, preventing the 140F motor temperature (in Leafspy) from tripping the fans & coolant pump from running on high is a real savings. Thanks knightmb for uncovering that.
Not to mention just having cooler electronics & motor for long term durability. Heat is the degradation enemy of electronics.

I think that is where the benefit is; any quality gear oil will help things run cooler and not trip the cooling system into high mode. I don't know what that means for winter driving yet.

OK, I'm going to deviate a little from using Valvoline ULV, instead trying the Mustang Mach E's Motorcraft Mercon ULV, only $6.24 per quart at a Ford dealership not far away. It has about the same "ULV" ultra-low-viscosity of kv100 4.5 vs. Valv ULV's 4.4, so I'm considering it the same.

Goal: If I can get my standard-route 70 mph run up the local highway down to an ending motor temperature of less than 135F, and I'll consider anything less than 130F to be a "win", then the experiment will essentially corroborate knightmb's finding (so far) that lower visc ATF helps a lot.

I think it would be a great test, especially since it's a lot cheaper than the Valvoline ULV, probably easier to get a hold of from a dealership. Auto stores don't seem to stock much of the Valvoline ULV for some reason. Imagine, a bunch of Leaf owners coming to a Ford dealership to buy ULV for their Leaf all the time. Sure will leave the staff puzzled.

(((( To any reading this thread: Note use of any ATF fluid thinner than Matic S is still a bit experimental. Stick with Matic S or DexronVI-type fluids if you're rightly skeptical of using ULV thinner oil. ))) .. Evidence seems to be mounting it is fine to use the thinner fluid; waitin' for mo' data though.

out of the way: Motorcraft Mercon ULV at my local Ford dealership (web pricing, ordered on their website for pickup in person) is cheap, but I did see that Grainger had Valvoline ULV for about a buck more per quart, downtown Denver, kind of a longer drive for me to pickup, and Grainger charges a lot for shipping. Amazon only sells Valv ULV in 6-packs, not cool. Walmart had Valv ULV for $10 on the web, mail-order only, so too expensive I guess.
Mercon ULV should be about the same fluid as Valv ULV, meant for the same applications (10-speed tranny & Mustang MachE's rear gears).

It's odd how Stealerships dealerships sometimes sell oil or ATF for cheap, and everything else is high there. Its the case for my VW Tiguan too, where dealership VW 508 spec 0w-20 oil is actually the best & cheapest to pick up. Their business profit model is supposed to make it tougher on the DIYer changing their own fluids, not encourage it thru actual friendliness, cooperation, & good prices.....

Just to try another Ultra-Low-Viscosity (ULV) ATF besides Valvoline ULV tried by others, this one is Ford Motorcraft Mustang MachE Mercon ULV. It should be similar to Valvoline ULV, you'd think, since both are meant for the same applications.

I changed out the Amsoil SS thicker stuff I had in there from 1,700 miles to 3,800 miles (still a new '20 Leaf). In fact, it's still breaking in. Or the magnetic plug iron dust might be from my heavy foot, as I do like to floor it when possible, something a 40kWH Leaf like this can do safely since it's not as fast as a bigger-battery Plus model.

Some observations:
1. Drain plug magnets are weak compared to GoldPlug or Dimple neodymium ones used as ICE drain plugs. They still work OK though.
2. I had exactly a half pint of Mercon ULV left, even though I spilled about 1/4 cup of the new fluid, meaning about 1/4 of the old Amsoil SS wouldn't drain out.

I put it up on Rhino-brand ramps on a slightly sloping driveway & it was close to level that way. Jack stands & other safe lifting is required if you don't have a mild slope with ramps.

Just a summary of what I used: 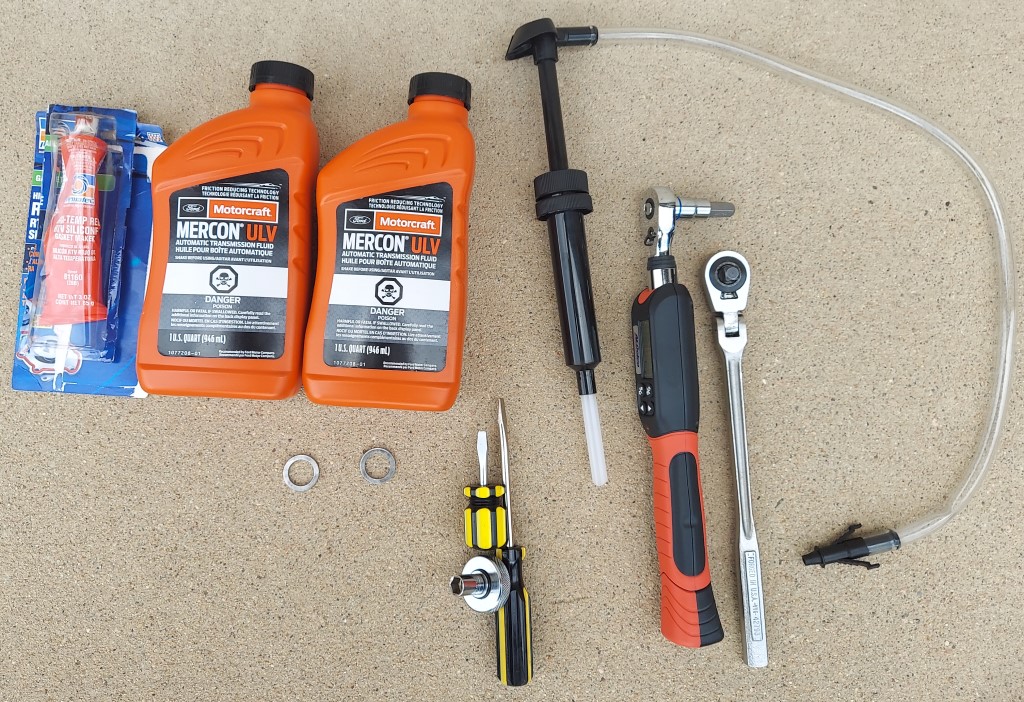 Torque to 25 ft-lbs.
Digital torque wrench is an ACDelco ARM601-3 3/8” from Amazon.
10 mm allen for the drain plugs
Aluminum crush washers are https://www.amazon.com/gp/product/B08DK ... asin_title ,
and measurements are Thickness: 1.95 mm / 0.08 inch, outside Diameter: 25.5 mm / 1 inch; inside diameter: 18 mm / 0.71 inch.
2 flathead screwdrivers to pry off the underbody cover clips.
Thumb drive with 10 mm hex socket for underbody cover screws.
Pump to handle wid-mouth or gallon bottles: https://www.amazon.com/gp/product/B088Y ... le_o00_s00
(The Amsoil SS ATF I put in before used a squeeze bottle that didn't need the pump; I should've kept the empty for this.)
RTV silicone goo for a final paranoid seal on the lower threads & crush washer.

And, still breaking in, or suffering from my lead foot: 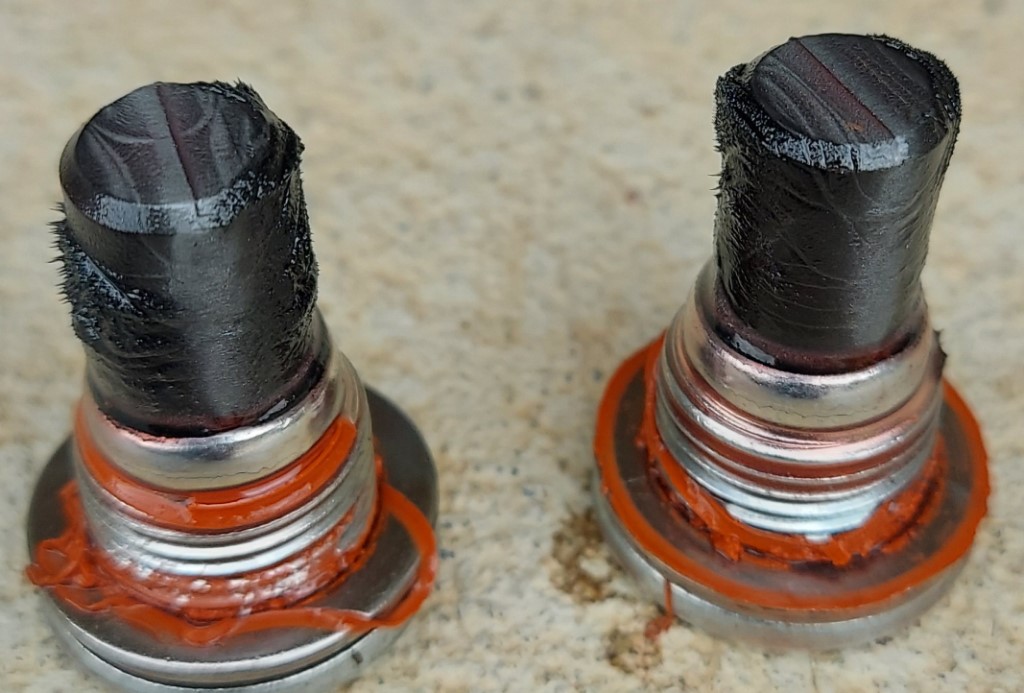 Tools are great. Here is me using a tool I made myself to get some tasty ant snacks: 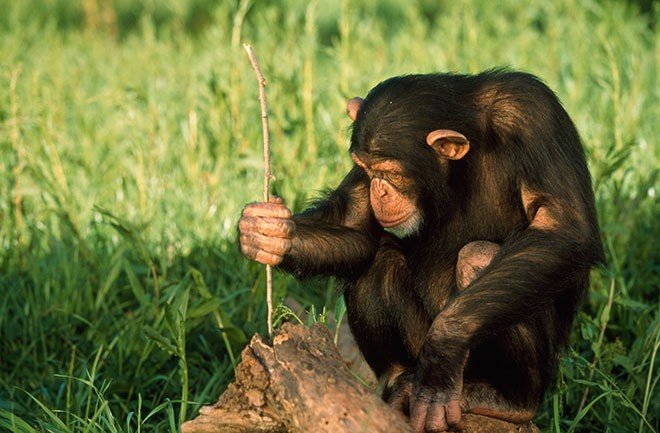 Great info voltamps but u really need to shave. 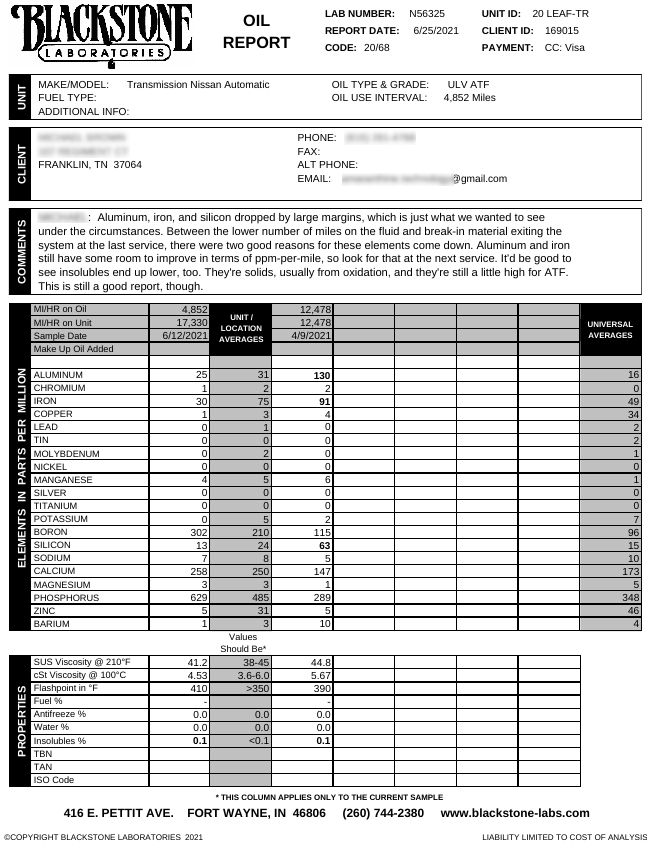 It's complicated. Summarizing:
The report doesn't say Valvoline ULV is unusual in any way. Typical stuff floating around in there. His magnets were very clean too. Thumbs up.

Looks fine. Some things don't show up on a Blackstone analysis such as whether or not Valvoline ULV threw in some anti-wear polymer esters, for example. Certainly the high flash point of the Valvoline indicates their base oils are great.

One should divide the iron accumulation (parts per million PPM) by miles driven to get an approximate idea of the wear rates. Both the new ULV and old Matic S shed iron Fe at around the same rate per mile. The magnets catch some too of course.

Note the old original Matic S fluid (column on the right) may have a tiny amount of manufacturing dust, as the aluminum & silicon was a little high, although completely normal.

Original manufacturing iron dust isn't there as much due to all the carbonitriding processing the gears themselves get to wash it off. Extra aluminim casting & silicon seals particles show up more when new. It's hard to look at original gear (or motor oil) fluid since break-in particles & original dust intermingle.

See the Blackstone image above or go to imgur.com: https://i.imgur.com/3FjYWi6.png

Phosphorus is in the important Extreme Pressure (EP) anti-wear chemistry. Boron I think is a friction modifier (FM), anti-wear (AW), or dispersant, or all three functions, not sure. ...
The original Matic S from the factory had lower amounts of EP anti-wear phosphorus but is typical of most ATF fluids so no problem there.
I think we see the higher levels of phosphorus EP in Valvoline ULV to counter the potential wear problems with low-viscosity fluids. They make up for the low-visc with higher EP additives.
Amsoil SS, similarly high in EP phosporus, is that way since Amsoil has always been a long endurance design.

Lubrizol is probably(?) the source of both Valvoline ULV & Amsoil SS additive chemicals (exclusive of the base oil component), and I wouldn't be surprised if Lubrizol sold the same additive package to both Valvoline and Amsoil since Lubrizol already had a high-EP style ATF package in their sales catalog, tested & qualified, ready-to-go, off-the-shelf. Guessing.

Viscosity of the old Matic S kv100 5.67 was right where Eneos (potential supplier) puts their version of that fluid. I wonder if Idemitsu's version of Matic S spec-sheet kv100 5.2 was actually a typo? Those errors happen on spec sheets & sometimes never get corrected, no kidding. Either that, or any difference between 5.67 & 5.2 from potential suppliers to Nissan's Leaf factories and Nissan OE dealership fluid is considered all within an acceptable range.
2020 Leaf SV - sold - I'll get another EV later...Reserved the irresistible Maverick Hybrid, here in a few months
2016 Ford Focus Electric (traded in at 34k miles, 5 years)
Post Reply
Load more posts
243 posts