The failure in my charger was pretty significant, so I'm not sure it's something that would happen slowly.

The car itself has insulation monitoring circuitry that will detect a short to chassis, so it's pretty unlikely that anything is damaged that badly if the car still drives and charges normally.

2011 Leaf? If so, you should be able to pull up the rear seats and see the charger. If the smell is really bad at that point, then it might be worth starting to plan for a replacement charger...

If there's no more smell there, I wouldn't worry too much and just keep using it.

Thanks for that, I'll try to have a look this weekend.

I have another question, its been pointed out to me that the fast charger does not use the on board charger, my car wont charge on either fast or slow charge i am wondering if this is relevant to my diagnosis of crook on board charger?

Oh wow, sorry for the slow response! I've been out of the country and I didn't seem to get a notification that there was a new post!

The fast charger DOES use the onboard charger, but only for communications/signalling. The power connection is direct to the battery pack.

If the on-board charger is completely toast (not talking on the CAN, potentially no internal supplies active) then you wouldn't be able to charge from a DC fast-charger, so that fault description is consistent with your issue.

rpmdk wrote:Thanks for that, I'll try to have a look this weekend.

How did you get on? Car still working normally etc?

It's been working fine. Charged properly every night since, haven't smelled burning plastic again. So I haven't taken it into the shop. I'm probably going to trade it in on a 2018, so I'm hoping I can just ignore it until then.

I realise that this is an old topic, but the following may be of use to other intrepid charger repairers.

The Mitsubishi iMiEV has a Nichicon On Board Charger that appears to be similar in many respects to the one in at least early Leafs. For example, compare the OP's burned capacitor (it might actually be a relay, or two small capacitors near the relay) with the AC filter from an iMiEV charger: 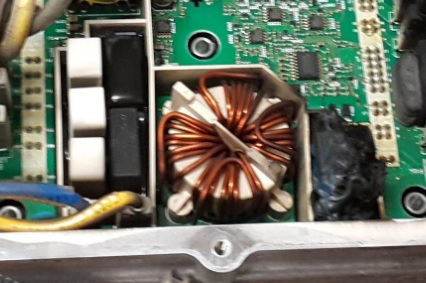 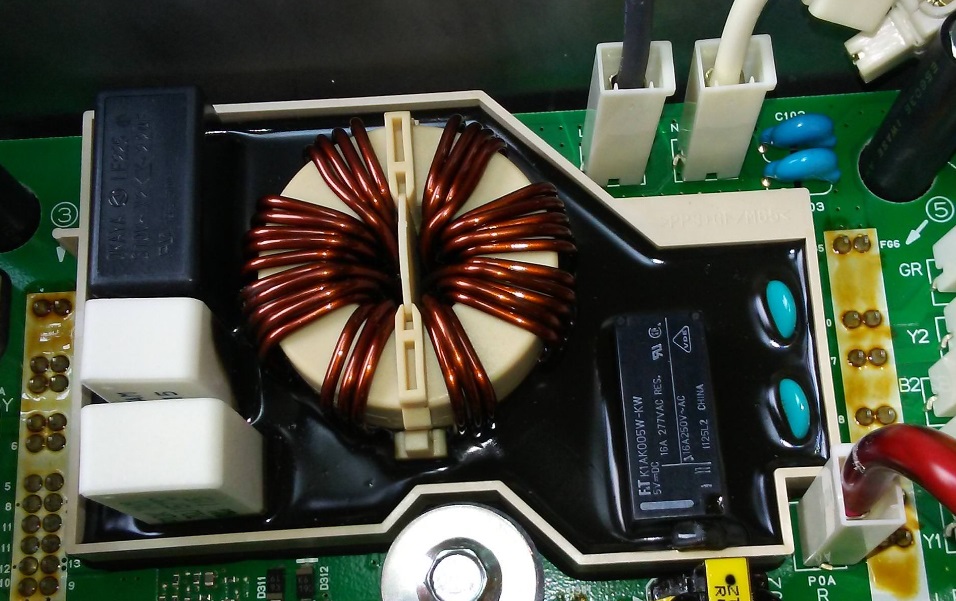 I note that the components that frequently blow in the iMiEV chargers are the small blue (with green tinge) capacitors to the right of the potted "cage", and the square component near them is a relay (the pre-charge relay), not a capacitor. The Nissan charger has three pre-charge resistors (white blocks to the left of the cage), whereas the iMiEV charger has only two. One of the iMiEV pre-charge resistors is larger than the other, and contains an integral fuse. When the iMiEV small capacitors blow, they can cause quite a mess including that black muck, and could well be the cause of the OP's fault. I'm not convinced that the OP's large capacitor (which I think may be the PFC capacitor) has vented; it could all be "fall out" from whatever happened in the AC filter cage.

The cause of the iMiEV charger failures is not yet determined. One of the prevailing theories is that when the charge is suddenly interrupted for whatever reason (mains failure, in the iMiEV's case it could be the 20 A DC fuse on the charger's output going open circuit from metal fatigue), the energy in the charger's inductors has nowhere to go except into those tiny capacitors, which can't absorb that much energy, and consequently fail spectacularly.

Edit: there is a lot of useful information in the following myimiev.com topic, including some partial schematic traces (only at the edges so far, but includes the AC filter components), and even an intriguing X-ray photo of the Waffle Plate™ (a potted assembly with most of the high power semiconductors).

The location is definitely a film capacitor in the Leaf. Mine was melted and you could see the foil.

I severely doubt it's killing a film capacitor with over-voltage simply from inductor flyback, but unexpected open-circuit on the output could absolutely cause this kind of issue.

JonoNZ wrote: ↑
Sat Aug 31, 2019 6:06 am
The location is definitely a film capacitor in the Leaf. Mine was melted and you could see the foil.

Interesting, thanks. I thought maybe the small capacitors when they exploded might have caused the film capacitor (which I thought at that point was the relay) to be damaged and melt as a consequence, but on further investigation it looks like this is the wrong side for those small capacitors (C121 and C122 across POA and NOA, Positive and Negative Outputs before the final DC filter in the iMiev charger).
2012 Leaf with new battery May 2019. New to me June 2019.

Re: 2011 - Dead Battery Charger (How to bleed air from charger coolant system

Just picked up a 2012 SL that will not charge with the Nissan L1 or at public L2 stations, but will charge at DC stations. I am getting these codes: b29c1 236c and p3173 00C0 so I got a charger from a wrecked 2012 to install this weekend ($550 shipped.) My question is about bleeding air from the charger coolant system. Does anyone have any steps or tricks for that procedure once I get everything hooked back up?

Thank you for any guidance you can provide!


Some background on the car:

Previous owner said it stopped charging on L2 and they took it to Nissan dealer - dealer quoted $2500 to replace the charger. The HV battery had been replaced in 2017 with what they claim was a lizard battery, but can't confirm that that it was actually a lizard or not. They didn't have the money to repair so they parked the car for 3 months with only 3miles of range remaining.... I bought it as-is and towed it home, but I stopped at a DC station with it on the trailer and filled it to 50% so I would be able to move it around at home. Even after the abuse of sitting near empty, the car still has all 12 bars and shows 53.07ah and 83% SOH in leafspy which I think is pretty good for a 2012 and a 3 year old battery with abuse.
Post Reply
Load more posts
60 posts