Yeah, so sounds like something is toast on that CAN link. 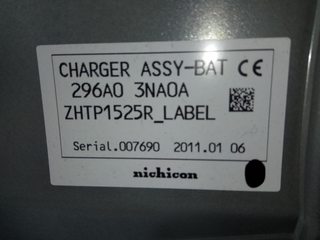 I studied the wiring diagram and if i interpret this correctly the 12 pin low voltage black plug should have multiple pins with 12v in. I have ascertained that two pins are live when the car is on or off and several more pins liven up to 12v when i turn the car on, naturally I can examine this further and unravel it entirely but for the moment I am assuming power supply is intact.
As for the pilot pin 5v - no, car on or off i get a 1.2v reading.
So If indeed I need a new charger and this is seeming more and more likely, the question now is Part No. 296A0-3NA0A ok to be Replaced By 296A0-3NA8A? or 2A both of which i can find new, no reply's yet from Bill at blue cars or Yury
My car was first registered in japan in Feb 2011

When I replaced mine, I deliberately grabbed the exact same model.

I have a reply from Nissan, they suggest I take the car to Auckland for possible software updates,
what do people think??
They say..
Our research shows that there is software updates available for Nissan Leaf that could be applicable to your fault that you are experiencing. These software updates can only be issued by an authorized electric vehicle ( Auckland, Christchurch, Wellington) Nissan dealer who has access to that software.
Our recommendations are that you try that first, the fault codes given to you indicate a communication error and battery voltage abnormal. This may be resolved by checking the software and its integrity.
A price on the charge pack 296A03NA0A is $7838.64 + GST, if this is in fact faulty it may have been caused by the software not being updated so again I would recommend insuring that this is dealt with first.
Hope this further information is useful and we believe that your next action is to have your software checked and verified as being current and possibly some further confirmation diagnostics to confirm that the control unit or battery is the cause of your problem.
I would also suggest to swap a charge lead with a follow leaf owner as this is inexpensive to achieve.

That's definitely an interesting response. Any word on how much they would charge for going through and confirming the software is all up to date? That's something I've been wanting to do on mine to potentially solve some weird braking issues.

Yeah its still running - in turtle mode - yours did that too I understand?
I rang Nissan takapuna as recommended by Nissan whg, I got a sensible bloke on the shop floor who said well look its got a problem they know nothing about and couldn't fix so they send it to us, we have to start from the beginning, Id like to tell you its as easy as a software problem but i will tell you now its not, these cars dont have a problem with this full stop. It could take and hour it could take ages to track down your issue etc,, not possible to quote a price. I explain where I am at, he says certainly have a crack yourself, we are here if you get in to trouble.
I got a second hand charger lined up from Bill $800+gst and transport, he says sold a few, this is the last one left, they seem to have a little bit of a problem.
Whats the weird braking issue you have got?

Yeah, same deal here. If the battery was anything too horrendous, it would either be stock still or not reporting via LeafSpy. That's what mine did and the 'fault' as far as the vehicle was concerned was that the on-board charger wasn't communicating on the CAN. It wasn't communicating because it was toasted and pulling the internal supply voltage down, but the car didn't know that.

Last Friday morning I went out to the car and experienced that burnt plastic smell. Yet the car had completed its charge and was ready to go. Since that morning I haven't had a problem charging it.

Any ideas what else might have happened overnight on that first Friday? Any concerns that I should get it to the dealership ASAP?
Post Reply
Load more posts
60 posts