bigedgar wrote:Just a quick note - I ordered a 16 amp Duosida from Zencar after a bunch of emails with Ms. Dream at Zencar to make sure I understood what I was ordering. I paid ten days ago, was told after I paid that they didn't have the unit in stock and it would be 7 days until they could ship. I was in no hurry and the delay was fine with me. It's now been ten days since I paid and haven't heard a thing despite sending two emails asking for status. This is my first time ordering directly from China with no company like Amazon or eBay to offer any assurances, so I was a little hesitant but went into the transaction understanding the risk. Hopefully it all works out, but I wanted to let people in this thread know my experience. I'll post an update when the transaction is resolved one way or another.

I ordered mine right near the end of the year/Christmas time and my order was also somewhat delayed. They were closed for a week?? during that time and unfortunately my order didn't get out until after their break

(and I thought Chinese factory workers were all slaves working for pennies and worked 7 12hr days.......j/k) anyway as soon as they opened back up I received an email from Dream apologizing for the delay and literately 2 days later I had my EVSE

This was also my first experience ordering direct from China(I don't even like to use ebay but rather Amazon) so I was also worried, but again I got my EVSE and saved a ton and it works like a champ, I wouldn't hesitate to order from them again. It's nice ordering from Amazon and to have local support and it's the reason that ordering that way costs more money, but IMO it's even more nice saving a big chunk of change.....if it's legit which these guys are, they just seem to have lots of time off during the most inopportune times

Note, and this was/is a concern of mine, I/we are the importer of these EVSEs and as such assume responsibility for any warranty issues. The mfg. will repair or replace the EVSE during the warranty period but it's the responsibility of the buyer(us) to get the EVSE back to the mfg., which shipping to China could get rather costly

In my thought something like a EVSE is probably pretty reliable and little chance of something going wrong but just so you(or who ever orders like this) aren't OK with this, I suggest paying more($100-$200 and not the option to have it custom built the way you'd want it) and fine a N. American based re-seller, preferably from say Amazon where they have a very good return policy and probably wouldn't charge for return shipping in case of problems with the EVSE

Haha! Odd coincidence that it's the plugs again

Need to see if they will put a L14-30 on as the plug.. also how long the wires are.. I have emailed them this morning..


6A-32A adjustable EVSE: Can select only 3 charging rates by shaking the EVSE!!!

Well I took the plunge, ordered one of those adjustable 30a EVSEs direct from the Chinese seller, Zencar. My salesperson was "Dream" who was pretty decent to work with and here are the specs I specifically wanted and got, in quotes are from seller:

Express shipping from China was $64 and they said I should have it no later than 8 days. I was nicked a $16.40 "PayPal fee" but I just wasn't sure if giving my CC # directly to a Chinese merchant(even though they seemed legitimate in every respect) was a good idea....
So a total of $380.40 shipped to my door for a 30a EVSE with a 8m(~25') cable and ability to limit current to 13a(for a 15 circuit) 20a(slightly overloading a 20a circuit but OK for shorter duration(an hour or so) 20a use) and finally 30a(they said max output with the L6-30 that I wanted could only be 30a) which should give me 27.5a on my '13 Leaf, plugged into a proper circuit.
I'll fill you in on how it works once I've gotten it and played with it for a while, no other portable 30a EVSE in this price range, the closest would probably be the $399 wall mount GE(only 18' cord) which IMO is way too bulky to carry around or maybe the $500 Juicebox basic that you cannot limit the charging current or $600 Juicebox you can limit charging current but your need to use your cell phone or lastly for ~$600 you could get a ClipperCreek that you couldn't limit charge current and only works on L2(240v). No for <$400 this seems a real versatile nicely priced EVSE, hope it works well

Base unit I ordered, note you don't get all the charging currents listed, I picked the (3) I most wanted and I believe I got a longer cord than is normal, I think 5m(~15') is standard unless you specify.
http://www.e-zencar.net/product/evse-32a/

@alozzy - yes, it arrived yesterday. Tested it out last night and it's charging at 3.x kw as promised (and they apparently DID wire my 14-50 plug correctly - I was on the lookout for this as someone else on this thread had their 14-50 plug wired incorrectly). The quality looks good. I'm happy.

I know this unit can operate at 120 or 240v. In my setup, it'll mostly be operating at 240v, but it'd be nice to ditch my standard Kia Level 1 EVSE and just carry the Duosida around. To do this, I'd need to be able to build an adapter cord to convert the the 14-50 plug to a standard 15 amp wall plug. Does anyone know if the Duosida will auto-detect 120v and step down the current appropriately?

(And yes, I know that building a franken-plug would be at my own risk, I could blow up the EVSE, my car, my house, my neighborhood, etc. - just exploring this in the interest of science at the moment...)

@bigedgar, I think you bought this EVSE:

If so, I don't think you can set the current draw so you're stuck with 16A.

Then find a heavy duty computer power cord at a local used computer store (printer cables are usually 14AWG) and cut the end off and wire it to the receptacle.

bigedgar wrote:
I know this unit can operate at 120 or 240v. In my setup, it'll mostly be operating at 240v, but it'd be nice to ditch my standard Kia Level 1 EVSE and just carry the Duosida around. To do this, I'd need to be able to build an adapter cord to convert the the 14-50 plug to a standard 15 amp wall plug. Does anyone know if the Duosida will auto-detect 120v and step down the current appropriately?

Yes it will work no problem but just so you know, if your car is capable of higher 120v charging(as Leafs with the 6.6kwh build in charger are) the car/EVSE will draw the same 16a @ 120v as it does on 240v. What this means is your wiring/breaker and outlet need to be able to rated for 20a, you'll blow a 15a breaker in short time.
The EVSE doesn't really step anything down, at 240v you have two legs that have 120v on each one or 240v between the two of them, at 120v one side is a neutral and the other is 120v so 120v between the two legs. To build your converter plug you need a 14-50 female plug and 5-15 male plug on the other, with a section of at least 12 gauge 3 wire between the two plugs. Wire the neutral from the 5-15 plug to one of the hots of the 14-50 plug, wire the hot from the 5-15 plug to the other hot of the 14-50 plug and finally the ground of the 5-15 plug to the ground of the 14-50 plug. The neutral or center horizontal pin of the 14-50 will not be used.
My favorite 14-50 female is:
https://www.amazon.com/Camco-55353-Fema ... rds=14-50r
And for a 5-15 plug you could use any heavy duty one you wanted, every hardware store or big box retailer will have them. You could also use a short 12 gauge extension cord like this, which would save you purchasing a separate 12-3 wire.
https://www.amazon.com/Yellow-Jacket-28 ... nsion+cord
Note I just purchased a couple of the above at my local big box hardware store for $4.99 on sale, the above link is more for reference, I think the price is kind of high.
Do NOT purchase something like this, it will NOT work with EVs.
https://www.amazon.com/Camco-55168-Powe ... 15+adapter
This would work but IMO is WAY overpriced:
https://www.amazon.com/Conntek-125-Volt ... rd+adapter
Lastly, a couple people on MNL sell such adapter plugs for cheaper than the Tesla one I linked, try VegasBrad or Tony Williams. They will still be more than you could DIY but if your not the DIY kind of person or unsure, that might be your best bet

Then find a heavy duty computer power cord at a local used computer store (printer cables are usually 14AWG) and cut the end off and wire it to the receptacle.

I would NOT suggest using a computer cord for his 16a EVSE. 14 gauge wire is only capable of 15a max and technically should max out for continuous use at 12a or 80% of 15a. 12 gauge wire is rated for 16a continuous and is a better fit for his EVSE

This is the type of computer power cord I was refering to: 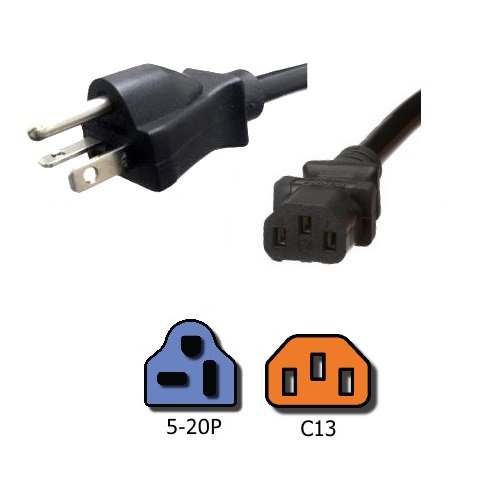